This recipe for Smoky Chipotle Barbecue and Bacon Baked Beans is so EASY, and so delicious, that I almost named them Susan’s Magical Baked Beans. The amount of flavor that’s in them IS magical, however, considering that so little effort is involved in making them. 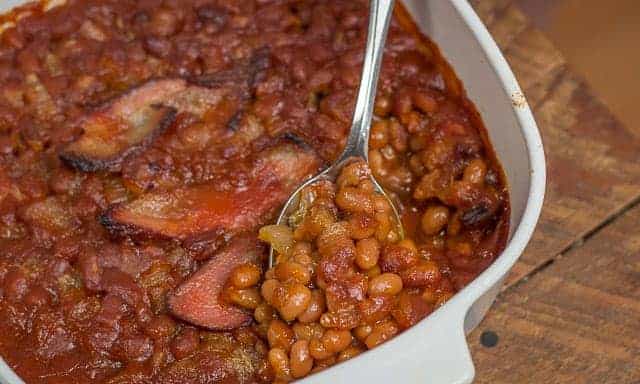 How These Baked Beans Got Their Name

I didn’t name them “Susan’s Magical Beans” (a semi-veiled reference to Jack in the Beanstalk’s Magical Beans) because I was afraid that someone might think I was referencing something else – that old poem of childhood: “Beans, beans, the magical fruit, the more you eat, the more you toot“. Because,  while that title pleased my inner 12 year old, I didn’t want anyone to think this recipe might cause excess tootage. It doesn’t.

Which is also why I didn’t name them “NOT Blazing Saddles Baked Beans“. So many younger readers might not get the old Mel Brooks’ movie reference, from the famous campfire scene. These are NOT those beans.

But they ARE the beans you’re looking for. (Star Wars reference.)

I stumbled across this recipe in a paperback cookbook that was sent to me “free”, with my subscription to Southern Living Cookbooks. (And while I hate to be a whiner, just TRY to cancel an annual subscription to their cookbooks. They’re better than the Columbia Record Club, of days gone by, or today’s NSA at tracking people down. You almost have to die to get out continuing to get their annual cookbooks.) This cookbook was called Outdoor Cookbook. But I’ve never cooked these beans outdoors.

Still and all, these ARE “The Beans to Take When They Ask You To Bring a Side Dish to an Outdoor Potluck.” (That’s another name they almost got named. (And that’s a reference to my famous “The Salad To Bring When They Ask You To Bring A Salad.)
In truth, I’ve changed this recipe so much through the years – it was originally called Barbecue Beans – but they never spend a second on the grill, and there’s no barbecue sauce, per se, in them, that they do deserve to be called Susan’s Baked Beans. But I wanted a name that would tell people immediately what flavors they could anticipate from this recipe.

Do yourself a favor and pin these on Pinterest. You’re going to want to make them all summer long!

The Ingredients of These Baked Beans Are Important

I always say that the most important aspect of becoming a really good cook, is starting with really excellent ingredients. So, I’m a little fussy about a couple or three ingredients. Don’t skimp, and then whine to me that this recipe wasn’t anything special. Start with the best, and you’ll end up with the best.

Prepare to be shocked. I use canned beans in this recipe. I’ve used lots of varieties of baked beans, from store brands, to cooking my own dried navy beans, but I think you’ll get the best result with Bush’s Original Baked Beans. (Don’t use any other variety, even of Bush’s, because they’re often too sweet, and when they assure you that there’s bacon in there, well, let’s just say it’s an insufficient amount, and will be unsatisfying, and your result won’t be the same. Pay attention now: what I just told you is an important tip!

I use my husband’s home-cured bacon. Stop rolling your eyes. If you happen to have bacon you smoke yourself, pat yourself on the back and revel in your superiority. If you don’t, buy the best bacon you can. I prefer Benton’s above all, but that’s TOO high off the hog for most of us. So, when I want a regular grocery store high quality bacon, I buy Wright’s thick sliced. Look, they’re not sponsoring this post…nor is Bush’s, come to think of it. But they should. Both of them. Wright’s makes a highly respectable bacon, and when it’s on sale, it’s worth snagging some.

The original recipe called for run of the mill chile powder, and while, it’s OK, the Smoky Chipotle Chile Powder is sublime. So find some, and buy it. It packs some heat, more than your average chile powder, so don’t say I didn’t warn you. If you can’t find that, you could get the same heat/flavor by mincing up a canned chipotle pepper in adobo sauce, and adding that,  or, I suppose, from adding several drops of Tabasco Chipotle Pepper Sauce. So…there’s some wiggle room for substitution in this ingredient, I think. But the smoky flavor of the beans is a big part of what makes them unique, so don’t miss out on it. 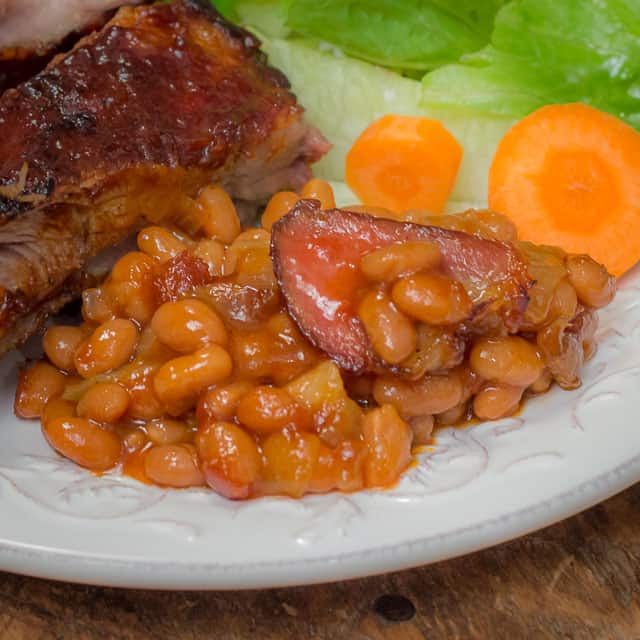 Hello, Gorgeous! These beans are not even remotely overcooked or mushy. They have a nice bite, and an amazing flavor, that will make you and your guests go back for seconds!

1
Amount Per Serving: Calories: 39Total Fat: 1gSaturated Fat: 0gTrans Fat: 0gUnsaturated Fat: 0gCholesterol: 1mgSodium: 166mgCarbohydrates: 7gFiber: 1gSugar: 4gProtein: 2g
Do me a favor and share, share, share this recipe! Pinterest is an excellent place to store recipes I want to try, I’ve found. Well, really, do yourself, and your family and friends a favor. Because these beans are luscious, and I don’t want you to miss out! 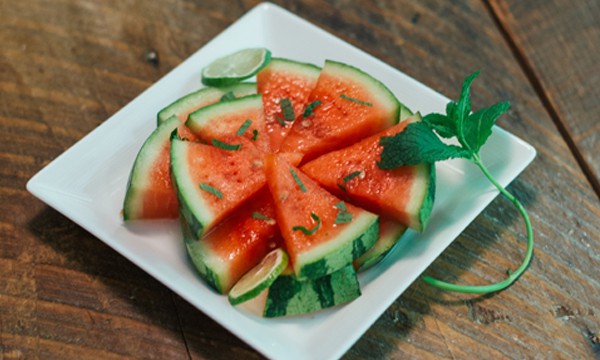 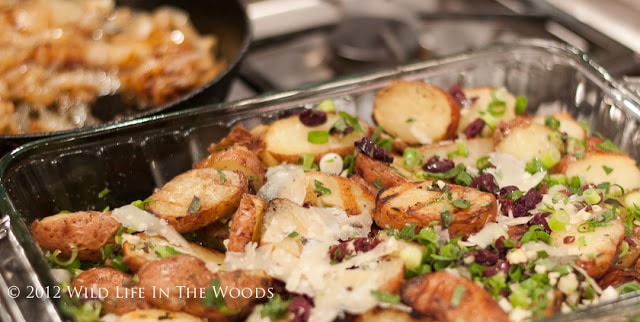 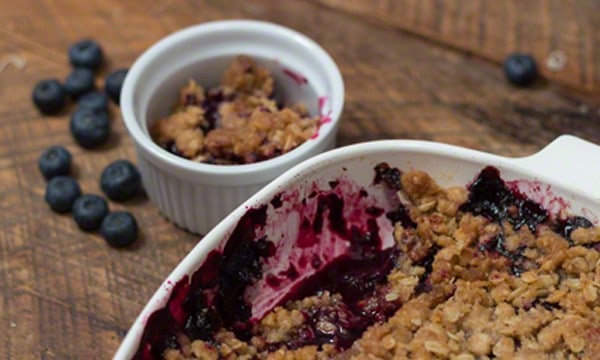 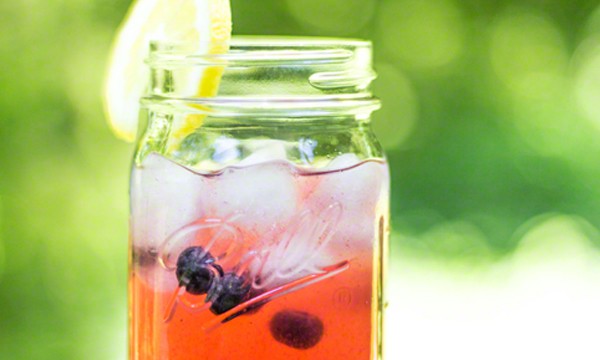 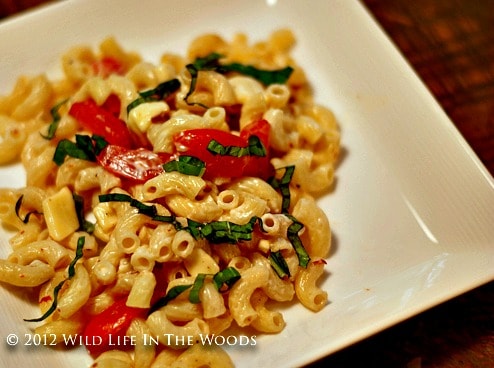 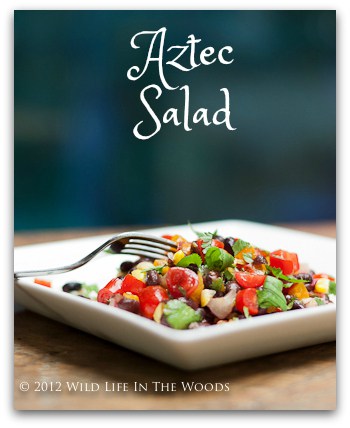 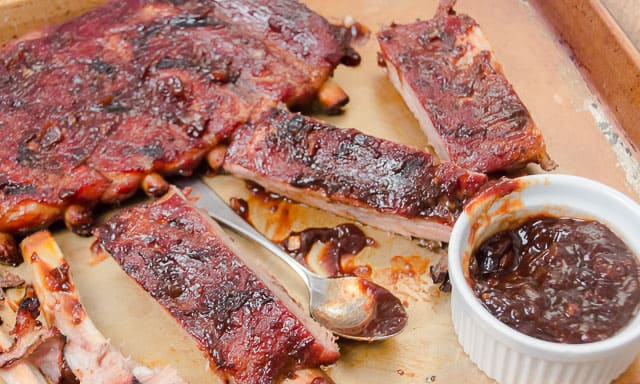 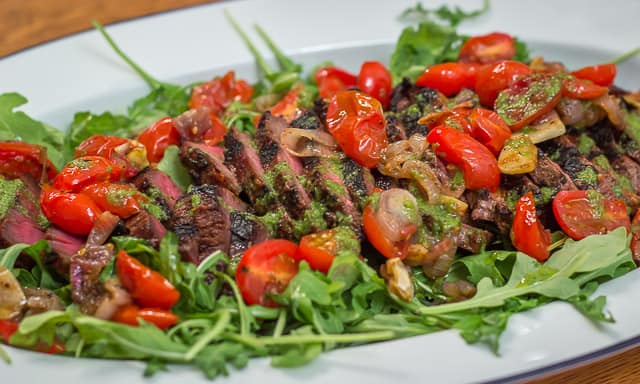