I received an envelope containing February’s shipment of spices from Raw Spice Bar, to do a review of their product, but all opinions are strictly my own. 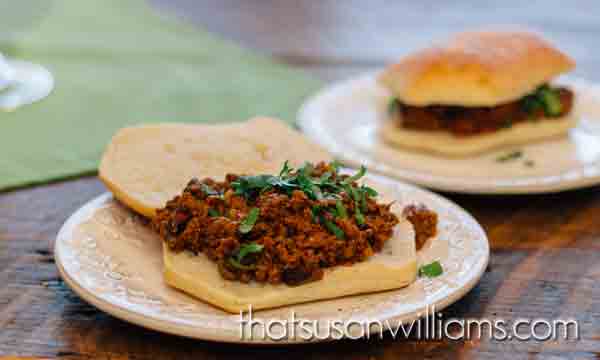 A delicious Sloppy Joe sandwich, with an Indian twist.

Anybody remember the character Injun Joe, from Mark Twain’s famous novels, The Adventures of Tom Sawyer,  and Adventures of Huckleberry Finn? This recipe for my sandwich, the Sloppy Indian Joe, has absolutely nothing to do with him. But read on, anyway. The sandwich recipe is worth it!

Let’s face it: Sloppy Joes can be boring kid food. But what if we took something that most of us remember from childhood (and probably have lost our taste for…because…well…they’re boring…) and put a whole new spin on it? What if we used freshly ground Indian spices that would really awaken our senses? And what if we turned that boring old Sloppy Joe into a sandwich that was kind of spectacular. Why not give it a fun name like the Sloppy Indian Joe?

Fresh Spices Are the Key:

It should be no surprise to anyone that I love cooking. Cooking utilizes both sides of my brain. Cooking takes knowledge that I’ve gained through the academic disciplines of science, chemistry, and math and combines that knowledge with true artistry, creativity, and intuition. Cooking involves all the senses: visually, my eyes feast on the bright colors of the ingredients, my fingers sense the feel of foods as I prep them, my ears enjoy the sounds as ingredients begin to sizzle in the pan, or crunch between my teeth, and the taste: oh, the heavenly taste, when all the right elements come together and are perfectly balanced.

The one sense I omitted in my description above is a critical one. Without our sense of smell, we’d lose much of the flavor in food. And very often, some of the strongest aromas in cooking come from the spices that we use. 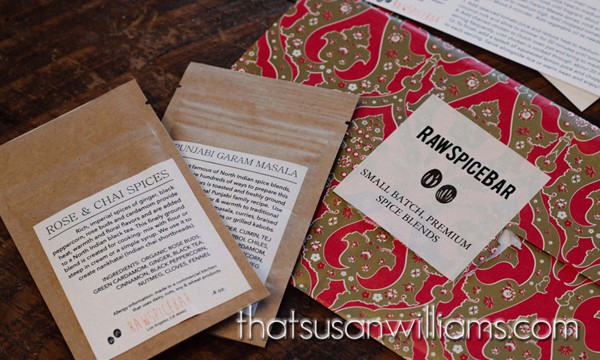 These are the spices I received in the February shipment from Raw Spice Bar.

That’s why I was more than a little intrigued when I was approached by a company called Raw Spice Bar. Their premise is simple. For a monthly subscription fee of $6.00, they mail to you an envelope of small batch spice blends. And just in case the spices they send you are beyond your ken, they include with each batch of spices, recipes developed by chefs to utilize those spice blends. (And if this doesn’t tickle YOUR fancy, imagine what a wonderful gift this would be for someone you know who loves to cook!)

In my opinion, Raw Spice Bar’s idea is genius, due to the speed at which the spices we buy from the grocery store tend to lose their aroma. (We’re supposed to be replacing our spices about every 6 months, or at least once a year. If you open a jar of spice, and you aren’t immediately hit by the aroma, you’re holding a lack of flavor in your hands.) The quantity of spice that Raw Spice Bar mails you may be small, but in this instance, the phrase “small, but mighty” is apropos.

My packet of spices contained a recipe card for Chicken Tikka Masala, and it’s a dish I love to make.  So, I’m familiar with what the spice blend used to prepare it, Garam Masala, smells like. My nose was NOT prepared for the explosion of aroma that greeted me when I opened the small packet of Punjabi Garam Masala that was mailed to me in the February package from the Raw Spice Bar. I really was overwhelmed by its intensity, in the very best of ways. Freshly roasted small batch spices really DO make a difference! 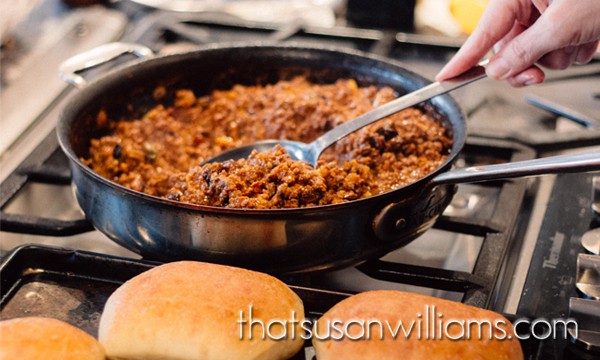 I served mine on ciabatta buns, this time. Next time, I’m thinking naan.

How I Developed this Recipe:

When I began cooking the dish I chose to utilize this spice blend of Punjabi Garam Masala, my family came running, and began asking how soon dinner would be ready. When coincidentally, our neighbor called around the time I was cooking dinner, my husband, sure from the aroma that this would be a delicious meal, invited her over to share. Let’s just say that the smell of this  spice blend cooking set all our taste buds to watering!

Now, if you know me, you know that I am more than up for the challenge of developing my own recipe, rather than utilizing the recipe they sent me, so that’s what I decided to do with the Punjabi Garam Masala. February’s envelope contained spice blends typically used in Indian cuisine. My dear friend Sandy introduced me to Indian cuisine. Sandy has since passed away, but every time I make an Indian-inspired dish, I feel Sandy smiling at me. So this recipe is for you, Sandy. I think you would have liked it. My whole family sure did! The only change I would make is that next time, I’d serve it on naan, instead of ciabatta buns. 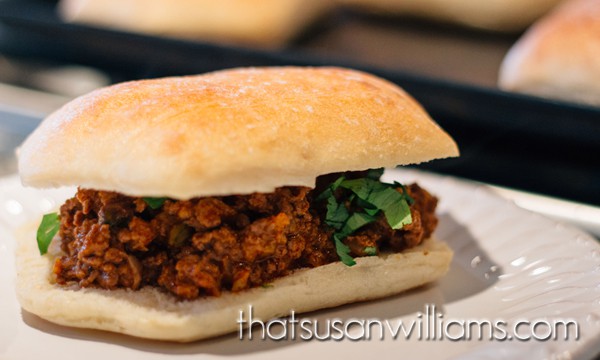 We loved the raisins and the pistachios!

I decided to do my own riff on a recipe developed by Aarti Sequeira  of Food Network. She called her recipe Sloppy Bombay Joes, and she makes her Sloppy Bombay Joes with ground turkey. As you may know, out here in the Boonies, we eat a lot of venison, because my husband is a hunter. So, since Sloppy Joes are usually made with beef, my idea was to try this recipe with venison, which really tastes like beef in recipes like chili. (If you don’t cook with venison, I’m sure that using beef OR turkey instead would be absolutely fine.)

I didn’t have the red bell peppers that Aarti’s recipe called for, so I chopped some celery and added that instead, and threw in an extra handful of raisins, to compensate for the sweet element that the red bell pepper would have added. I wasn’t sure about adding pistachios and raisins to a sloppy joe recipe, but everyone who ate this dish LOVED the pistachios and raisins, so, don’t omit them (unless you’re allergic). 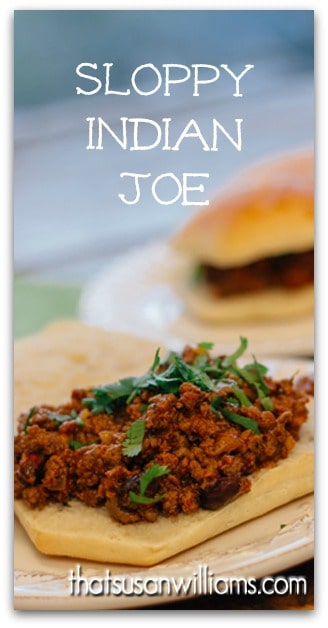 Huckleberry Finn’s pal would have gobbled these down in two shakes of a deer’s tail. Pin this on Pinterest, so you’ll have it when you’re ready to make these! 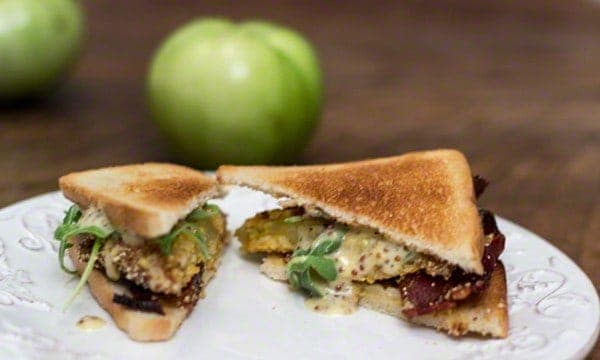 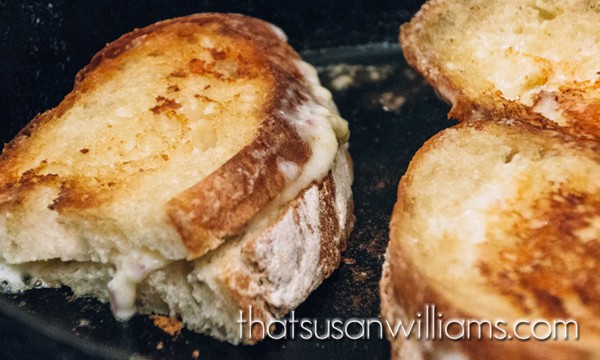 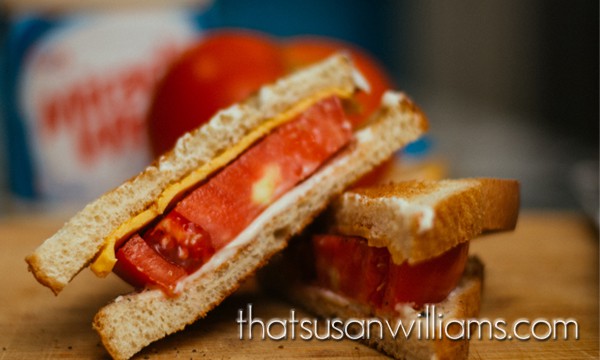 Recipe for a Redneck Brew-sketta (aka a Tomato Sandwich) 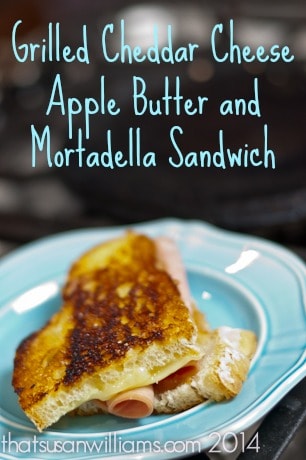 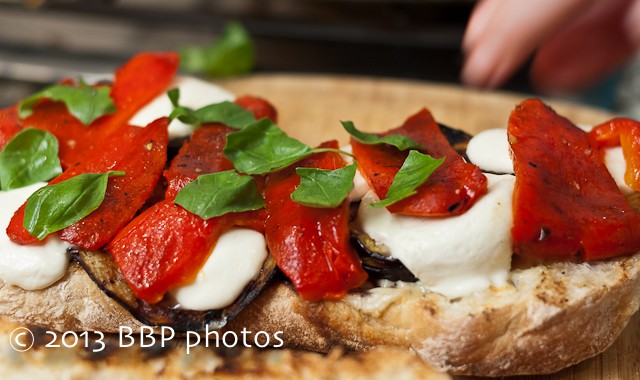 Hi Susan! I LOVE Raw Spice Bar and this recipe seems pretty easy to make. I think I am going to add it to my rotation using ground turkey. :-)

Oh yum, this looks good Susan. I would love it on Naan, in fact I think I will make it before too long. Are these spices available to anyone?

If you click on the link to the Raw Spice Bar, you can purchase that particular blend from them. I can tell you that their blend of Punjabi Garam Masala contained coriander, cumin, tej patta (which I have never heard of before, but which physically resemble - but are not - bay leaves), Kashmiri chiles, Arbol chiles, green cardamom, black cardamom, cinnamon, cloves, black peppercorn, ginger and nutmeg. But you can find other forms of garam masala, from other vendors (as I'm sure you know).