Kale, Bacon and Cannellini Bean Skillet Pot Pie is creamy, delicious comfort food for a cold winter’s night. You get all the nutritional health benefits of kale, that dark leafy green that haters love to hate, all the fiber of beans, and….BACON. And…Pot Pie! Who doesn’t love a pot pie? Even a kale hater is going to love *this* pot pie, with bacon! So, there’s a little something for everyone! 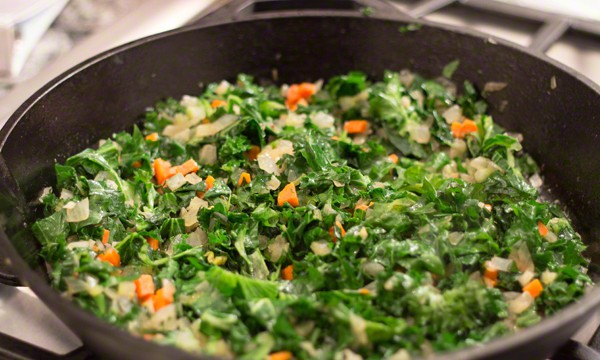 I’m always on the lookout for creative ways to use greens, not only because they’re so nutritious and good for you, but also because I belong to a CSA group. (That’s a Community Supported Agriculture group.)

Each week, my CSA provides a box of fresh locally and organically grown veggies, and I share my box with two other friends, each with smaller families. In the late fall and winter months, our CSA gives us tons of greens, which, I personally love. Kale is one of the most nutritionally packed veggies in the veggie world, but I have one family member who doesn’t care for it. So to get that person to eat kale, I sometimes will “dress it up”, a bit. 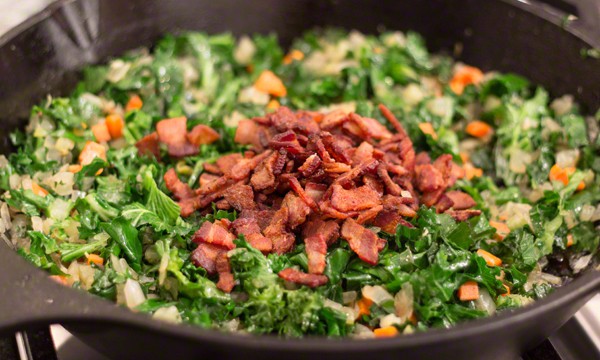 Adding the bacon to the sautéed veggies certainly “dresses it up”.

And Then Came Southern Cooking for Company

A few months ago, a local friend of mine, Nicki Pendleton Wood, who is a fellow Nashville food blogger, sent me a cookbook to enjoy. It was a cookbook she’d compiled that shared recipes from great southern cooks, and many of them were food bloggers! The cookbook is entitled Southern Cooking for Company.

Nicki’s cookbook contains not only tons of wonderful recipes, but it also is packed with tips for entertaining, from great hostesses all over the South. Because you KNOW if you ask a food blogger to share one of his or her stand-out recipes, they’re going to share with you their very best!

Nicki has been a food writer for the Nashville Banner, the Nashville Scene, and the Nashville City Paper, so she knows her way around telling a story. I read this cookbook like a novel, from cover to cover, because that’s the way I roll when I find a cookbook I’m excited about. I didn’t want to miss a thing. For each cookbook I really like,  I compile a list of recipes I want to try, and leave that sheet of paper inside the book. The piece of paper I used for Nicki’s book got filled front and back , and then, I needed another! So, that should tell you something!

The recipe I’m sharing today is the first recipe I’ve actually tried from Nicki’s book. I altered/adapted  it a bit, as good home cooks nearly always do. The recipe was contributed by Kat Riehle. 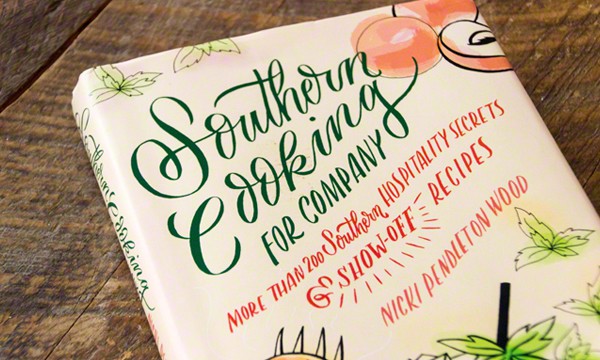 Kat served her Bacon and Kale Pot Pies in  adorable little individual ovenproof bowls (you could also use ramekins). But I didn’t want to take the time to portion the filling out, or even transfer the filling to another cooking vessel. Plus, I have my own pie crust pastry recipe that invariably works, that I know like the back of my hand, so I decided to use my own pastry recipe, and make enough for a double crust pie so that I would be sure to have enough pastry to cover my cast iron skillet and make a nice fluted edge. 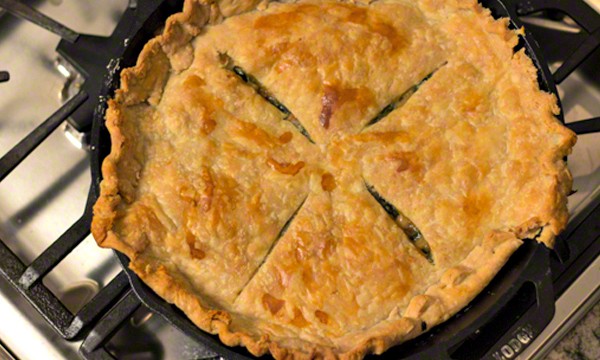 With my recipe for flaky pie crust, you can’t go wrong. You’ll want to use the pie crust recipe in every pie you make!

I’d never tried making a pot pie in a cast iron skillet before, but I couldn’t see why it wouldn’t work. And, it would save me washing one more dish, which sounded awfully appealing at the time.  It’s a one pan plan I highly endorse! OK, technically, there was also the pan in which I mixed up my pie crust pastry, but APART FROM THAT, it really was a one pan meal. Well, except for that sauce pan I used to make the sauce. But that’s IT! 😀

And if you wanted to make it even quicker (and remember that I never ever do this) you could even use a store bought crust. But I hope you won’t. Pie crust pastry is simple to make, and only takes a few minutes, and it’s sooo much more delicious and flaky.

Although Nicki sent me a copy of her cookbook to enjoy, she did so with no strings attached, and doesn’t even know I’m giving her this shoutout. 🙂 I’m doing it because I want to, so, clearly, all opinions are my own. I like to tell my friends about good books I’ve read.

The Recipe for Kale, Bacon, and Cannellini Bean Pot Pie

Make the pie crust pastry first, so it can chill while you prepare the bacon, sauté the vegetables, and make the sauce. By the time you've done that, it will be time to roll out the dough, and bake your delicious skillet pot pie.

Here’s the pin, and if you want to do me a favor, I’d really appreciate it if you’d pin it on Pinterest!

Well I would eat dig in to that one. All my faves and that crust looks delish. You've reminded me to take a look inside that book. I forgot about it. My recent post Snow Cream, with a Sugar Free Option

Love this idea and will definitely renovate it to make it fit my dietary constraints. Yum. Kale and bacon.

This looks amazing! The crust is so inviting. The cookbook is adorable. I love cookbooks and have shelves of them. My daughter has already told me she won't ever buy a cookbook because I probably already own it!