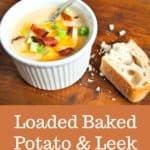 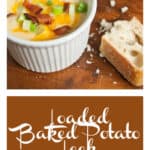 This recipe for Loaded Baked Potato Leek Soup with Bacon is better than most recipes I’ve seen for Potato Soup, because it has LEEKS in it. Leeks are my husband’s favorite: they lend a subtle  sweet under-note to this outrageously rich, delicious, savory soup.

Loaded Baked Potato Leek Soup with Bacon can bring any hungry tummy, and soul,  good cheer. But what about good luck?

Have you ever heard this traditional St. Patrick’s Day phrase?

“The Luck of the Irish“.

It hit me this morning as I was planning this post, that we Irish, as a people,  have had spectacularly bad luck.

Can you say “potato famine“? For six years?

I thought you could.

Let’s Talk About What A Frugal Meal This Is

Be that as it may, my people survived those years, in part because of their thrift, and this meal is quite a thrifty meal when your finances are kind of tight, because at my house, it’s actually two meals for the price of one, with very little expense for the amount of protein involved. (Soup the first night. Loaded potato skins the second night. Mmmm. Loaded potato skins. Love those.)

Bacon packs a powerful amount of flavor in a small portion, and you don’t have to cook THAT much of it to take advantage of its flavor boost. I use as much as I do (6 slices) and spread that out over two meals, so, really, it’s just 3 slices of bacon per night. Not THAT much.

And I buy cheddar cheese when it’s on sale, grate it, and store it in 2 c. portions in ziplocks in the freezer, and take it out when I’m ready to use it.)

So, really, the only ingredient that I use in this soup that is a bit pricey is the leeks. (Which you could omit, and opt for only green onions, which are cheaper. But if you can afford the leeks, you totally should use them. Their sweet flavor adds so much to this soup!)

Would A Slow Cooker Version Be Better?

I’ve tried several versions of baked potato soup, because I only share recipes that are the best of the best, right? I tried America’s Test Kitchens Slow Cooker Loaded Baked Potato Soup, certain that it would likely be my winner. There’s something magical when you put the words “Slow Cooker” in front of a recipe. (I get a lot of hits that way from the search engines, too, from people looking for ways to utilize their slow cookers better.)

My verdict? Surprisingly to me and my family, the America’s Test Kitchens recipe for the slow cooker was not the best!

Homeschoolers For The Win?

My family and I all preferred the version I’m going to share with you today, that is my own adaptation of a version I saw many years ago on a homeschool internet forum. I altered the original recipe by  sautéing leeks in the bacon drippings, and adding those to the soup. I also cut back on some of the fat in the original recipe, which in my opinion, made it much mo’ bettah.

(OK, and here’s my favorite inside story on the origins of this recipe. On this homeschool forum where I found the recipe, they had software in place that was very locked down in terms of not allowing anything REMOTELY resembling an obscenity. In fact, the software was so strict that when this sweet homeschooling Mom’s recipe directed her readers to “prick the potatoes“, the recipe came out looking like this on the forum:

Software censoring of a perfectly good verb. Now, I don’t know about you, but that makes my mind go places it NEVER would have gone had they not been busy keeping me all pure and stuff.
Anyway…back to the subject at hand. 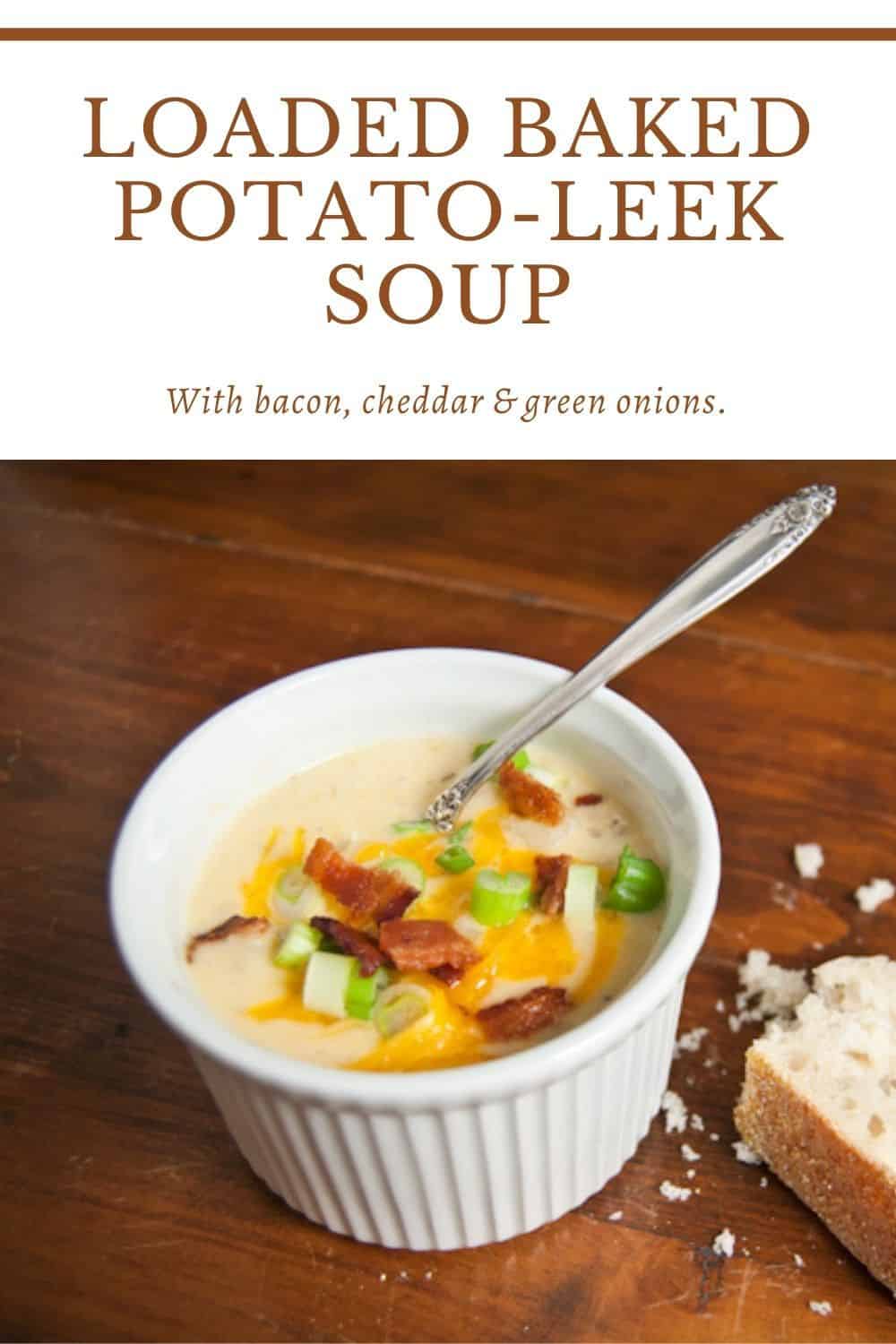 Here is the recipe for

The Recipe for Loaded Baked Potato and Leek Soup with Bacon

If you’re interested in other recipes that relate to Ireland or St. Patrick’s Day recipes, check out the following recipes:
Corned Beef and Cabbage
Champ (Irish Mashed Potatoes)