Have you ever felt kind of like a “fake” adult? Like you don’t know exactly what you’re doing? Or where you’re going? Maybe even felt at a loss as to what your next step should be? 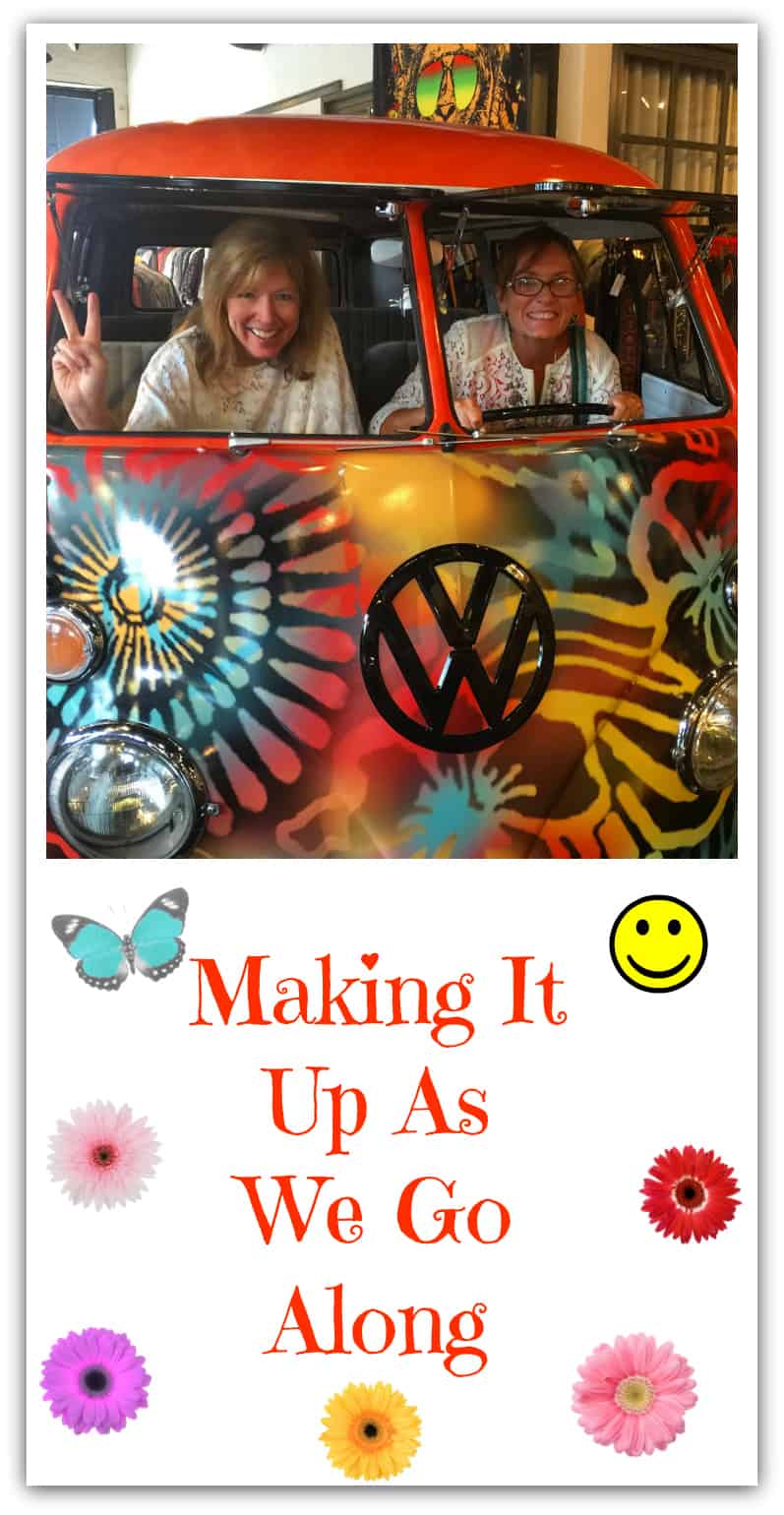 These girls look like they could use a little direction. Bless their hearts. Perfect for sharing with the directionless on Pinterest!

My mom died when I was 30. My dad, when I was 42. Each died right around the time I was finally ready to sit at their feet, and have them unfold to me the mystery of life. I wanted to listen to them: to gain from them some of the wisdom they had acquired through their years on this earth.

But as suddenly as if a very evil wizard waved his wand: poof! They were gone.

I was a newlywed when Mom died quite unexpectedly of a brain tumor. I had just opened the door in my life that was labeled, “Wife”, five months earlier.   Suddenly, right when I needed her, there was no one to call for for advice in regard to this brand new role I’d taken on. There was no one to call for solace when I’d been misunderstood. From a very important practical standpoint, there was no one to answer my cooking questions, now that I finally had my own little family unit. I was attempting to prepare  real-life, actual  “meals” for the first time in my life, and  I needed quick answers as to how she made her amazing spaghetti sauce! All my mom’s culinary secrets, and all the recipes she kept in her head – everything that I had failed to absorb through simple osmosis, swirled down the Kitchen Drain of Life.

Immediately following my Mom’s death, my Dad retired, and began chasing the dreams he’d delayed for 40 years while working to take care of his family. I think he heard the distant sound of the Grim Reaper sharpening his scythe, because he became a very different man to me those last 10 years of his life. He was focused on going for the gusto, and on doing the things he’d always wanted to do. Freed up from most familial responsibilities, not so fatherly was he.

Who can blame him?

So in my roles of wife, and mom, I’ve always felt keenly my orphanhood.
My husband’s folks died in in those early years of our marriage, too, so I’m an orphan, married to an orphan. We’ve discussed through the years  the uncertainty we feel as we go about making decisions – the lack of parental wisdom to which we have access. We’ve joked that we are “making it up as we go along”.

Am I the Only One Who Feels Like She’s Making It Up?

But I have a group of girlfriends who are all around my age or older that I meet with each Friday morning. We’re committed to living life together, come what may, and each Friday, we meet.  Sometimes we discuss a book we’re reading. Sometimes we just have breakfast and pray and talk. Many of them are empty nesters, and as I listen to their hearts, I have been astonished to learn that these wonderful women, to whom I turn for wisdom, support, and laughter – that nearly ALL of them feel that they, too, are making it up as they go along. As their children have grown up and moved out, many of my friends have found themselves in the position of having to re-invent themselves and their lives, all over again.

“Wait a minute,” I thought to myself one day, while reflecting on the reality that women who were 10 and 20 years older than me were in doubt about the next phase of their lives. “By THIS point in life, aren’t people supposed to have this stuff figured out???!!!”

I think that as we look at the lives of some folks around us, (indulging in that futile activity known as comparing ourselves to others) we toy with this illusion that they seem to know where they’re going: they have a strategy, a plan. They’re on course, and they seem to be making it happen. And while to some extent, that MAY be true, if they are following a “plan”, it is also true that someone, somewhere, just made up THAT plan.

In making our plans, we like to imagine that in so doing, we have things under control. When the reality is, we’re just tossing those plates of ours into the air as fast as we can, and hoping like anything that we put the right spin on them. And then life pitches a fastball right into the midst of our circle of spinning plates,  and the plates veer off course, one crashing into another, until everything in our little Juggling Act of Life lies smashed on the ground.

In writing this post, I wanted to express this sentiment aloud somewhere, that it is my strong suspicion that EVERYONE is pretty much making it up as they go along. I take some comfort in that thought, as someone who finds herself right smack dab in the middle of *another* very transitional phase of her life.

My oldest is graduating from college this year, and who knows whether or not he’ll have a job when he exits, or if he’ll be moving back in with us for a while. (Dear God, Please don’t let him be 41 years old and living in my basement playing video games. It was for this reason I moved into a house that doesn’t even *have* a basement.) The youngest is trying her hand at working on her music. Who knows where that will take her? (Not me!)

So, I hope that the thought that “everyone is pretty much making it up as they go along” is of some comfort to you, if you find yourself facing some circumstance that has left you at a loss. The thought that ‘”So-and-so” seems to have it all together” and that they “know what they’re doing” is probably completely untrue, even if old “So-and-so” thinks they actually *do* have it all together. Proverbs 19: 21 says that “Many are the plans in a person’s heart, but it is the Lord’s purpose that prevails.”

I’m not saying that having a plan is a ~bad~ thing. Plans can be GREAT!

I’m just saying that as believers, we’re called to live lives that are open to the direction of the One with whom we’re walking.  We’re told, in fact, in Galatians 5:25, “If we live by the Spirit, let us keep in step with the Spirit.” And that indicates living a life that is based on TRUST. (There’s that word again! My word for the year!) I think it also means that while it’s fine to have plans, that we walk out those plans with one ear open, and cocked heavenward, willing to be flexible enough to make any course corrections called for.

I have a Counselor, the Holy Spirit, who lives inside of me, on whom I rely, and in whom I trust. Even if my biological mother and father are not here on this earth anymore walking with me, to share with me their wisdom and advice.  I have a Friend who will never leave me, nor forsake me, with whom I can talk over my plans. Talk about a faith walk!

I have one final verse for your consideration, and it’s the verse we’ve built our marriage around. Proverbs 3: 5-6 says,

“Trust in the Lord with all your heart, and lean not on your own understanding. In all your ways acknowledge Him, and He will make your path straight.”

Making it up as you go along really isn’t so bad after all. Not if you have help.

I have an old friend here Susan who's a judge. He used to call me "Casper" in high school and was an awful tease. Now he sits behind his huge desk in the courtroom, looking quite legal and a bit threatening. One time when I testified as a psychologist in his courtroom, I called his office afterwards, laughing."Ok, did you feel like we were playing dress-up or was it just me?" I'm not sure he thought it was funny, but I did! I so get it!!! I'm so sorry you lost your parents at such a young age. Thanks for talking so poignantly about it.

We are winging it by necessity: we can make marital, financial and life plans but we cannot control outside circumstances or other peoples' behavior. And we certainly cannot affect when our loved ones die and take all the important information with them. (Why, oh why, didn't Grandma show me exactly how that soup was made?)

Loved this. Yes, we're all making it up. After all, this is our first time living these lives. If we knew better, we'd do better. We can only feel our way along. Thanks for the great reminder. My recent post If Our Bed Could Talk