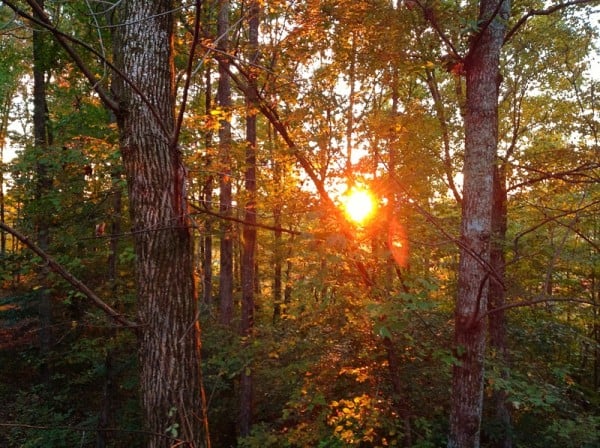 Gratuitous fall photo. This is the view from my front porch.

I wrote these paragraphs years ago, trying to capture a moment in time. It was a moment that I never got to experience.

I was participating in a study called “Israel and the Minor Prophets” through a class offered by Bible Study Fellowship International. I was absent the day the lecture on Hosea was presented, but it was given by Sue Johnson, who is the best Bible teacher I have EVER heard, of either sex, anywhere, at any time, in my entire life.

Of course, all my friends said it was the best lecture she ever gave. And I missed it!

So, I asked my closest friends, “Can you describe what you heard her saying? Tell me what YOUR takeaway was, from that lecture?”

(I had been studying the book of Hosea myself that week, and I had answered all the discussion questions, so I had a general idea where she might head with the lecture.)

I wrote the following to try to preserve what I heard my friends telling me, and what I believe I heard the Holy Spirit saying to my *own* heart, following my study of that book, and what my friends shared with me in regard to what they heard, from Sue’s wonderful lecture. Perhaps her best lecture ever. The one that I missed.

Sue has a big birthday coming up, so I’m sharing this in honor of her.

In the Old Testament book of  Hosea, God tells the prophet Hosea to take to himself a wife of unfaithfulness, and that this will symbolize God’s relationship with His people Israel, who are behaving unfaithfully toward Him, chasing after foreign gods. Hosea obeys God, and his wife indeed does behave unfaithfully. She is apparently so brazen in her lifestyle that she ends up completely out from under Hosea’s protection, and finds herself being sold as a slave. God sends Hosea to buy back his adulterous wife off the auction block.

“The Lord said to me,
‘Go, show your love to your wife again, though she is loved by another and is an adulteress. Love her as the Lord loves the Israelites, though they turn to other gods and love the sacred raisin cakes.” So I bought her for fifteen shekels of silver’.”

I wrote this next meditation, putting myself in the place of Hosea’s wife, Gomer. Yes, I know it’s a funny name to those of us who have watched The Andy Griffith show. Try to ignore that.  🙂

I’m hoping you’ll find yourself relating to Hosea’s wife, too, just a bit.

So, there I stood, naked, trembling, alone, my hands and feet heavy with the weight of the chains on my wrists and ankles, unable to raise my eyes from the shame of it all. For sale, on the auction block, my future and destiny in the hands of the highest bidder. And who could possibly want me?

And weren’t you, just like me, up on an auction block as well? Those chains: weren’t they weighing down your hands and feet, too? Were we not all sold as slaves? Slaves to sin? Who cold possibly want you, with all the guilt and shame you bear?’

And then, I heard a voice call out. I lifted my eyes from the ground, to the back of the crowd, and saw Someone’s raised hand, then saw Him make His way through the milling crowd, toward me. My Redeemer was coming. And the look in His eye as He called out, “I will pay the price” was a look of such tender compassion that it completely stole my breath away. And He stepped forward, holding toward me a garment, and He covered me with that garment, hiding my shame, ordering that my chains be removed. And led me down from that auction block. And the garment became for me a Robe of Righteousness. Totally unearned, totally undeserved, yet mine, nevertheless, so that when He looks at me, that is what He sees.

What’s more, He bought me not to be His slave, nor even His servant. He calls me “friend”. He asks me to walk with Him, to know His heart, to listen for His voice. He has plans for me to live with Him and His Father, forever. And His Father loves me for the sake of His son, and He has adopted me into the family.

He is my Redeemer. He bought me out of slavery, when my shame was at its greatest. He gave me a brand new life. It is an eternal life that will never end, meant to be lived in complete connection with Him. And the love that He has for me is a love that will not let go. It is nothing I have earned, but it is my identity, nevertheless.

Happy Birthday, Sue! I love you now, even as I loved you so many years ago, when you invited me to walk a little closer. I know you’d tuck your chin and shake your head at the thought, but you’ve always been the one I admire more than anyone else I’ve ever met.  Wishing you love and joy on your special day.

That was just beautiful and brought a tear to my eye. Thanks for sharing this with us.

I love this, Susan! I was planning on starting a study of Hosea this week...His perfect leading and timing, once again! :-) My recent post Adjusting to fall

Beautiful meditation from a beautiful heart!

I like your perspective here as being on the auction block and having a redeemer come. I feel we have all been the unfaithful Israel. Thank God for his grace, love and mercy. My recent post 5 Tips on How to Raise a Godly Son.

Wow. What a great reflection on Hosea. It's such an interesting book, full of sadness and yet.... I love praying the Scriptures in this imaginative "You are there" way. Thanks for the post My recent post From the Dark Side of the Fridge: Salad Basics II