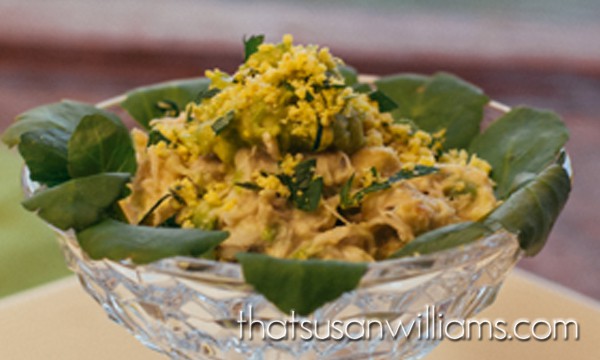 See the little bits of “mimosa”/egg yolk and parsley that are sprinkled over the top? Amazing how much flavor they add!

A Recipe from The Unofficial Mad Men Cookbook

You’ll find the recipe for this salad in the cookbook:  The Unofficial Mad Men Cookbook.  Avocado and Crabmeat Mimosa is a recipe developed by the White House chef to the Kennedy family. The dish is made with two of my most favorite ingredients: avocado, and crabmeat. With the expertise of a White House chef, and ingredients like those, you really can’t go wrong!

It’s funny how the recipe I’ve chosen to share ties in perfectly with both the TV show Mad Men, (which is, at the time I’m writing this, entering its last season) and with the Kennedy White House. I love it when a recipe has a story, so to share this fabulous dish with you, I thought I would begin by telling you the story I see that connects this recipe to the show itself.

Both A Show, And A Recipe, From The Kennedy Years

Mad Men is first and foremost a period drama. In each episode, we see the impact of the volatile decade of the 1960’s on the lives of the main characters. The series begins, in fact, in March of 1960, during the time in which the Kennedys are running for office.

What was it that drew us so, to Jack and Jackie Kennedy ?  They possessed beauty, glamour, and sophistication, as well as wit, ease, style and grace . All these qualities attracted us, as a nation, like moths to the Kennedy flame. The era of their administration was, in many ways, Camelot, incarnate. 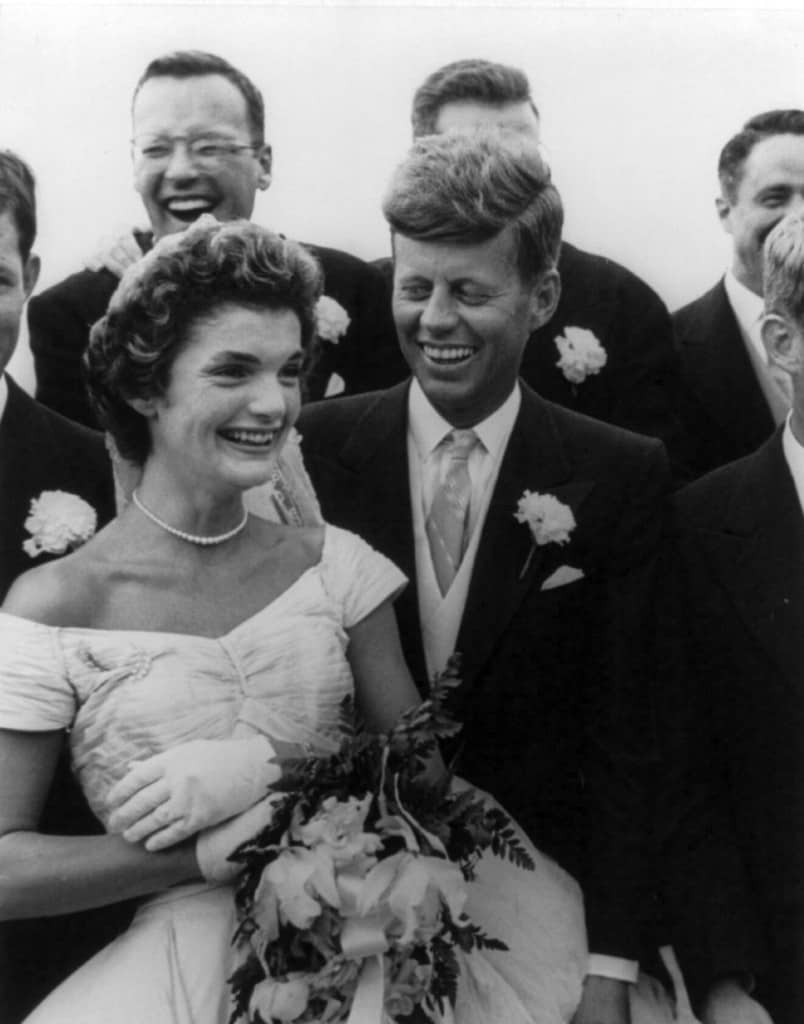 Jack and Jackie Kennedy, at their wedding

What captivated us, more than anything,  was the dream – the image we believed we were seeing. Accurate or not, they possessed that special *thing* that so many of us long for. They had, for want of a better word,  “it”.

Like Jack and Jackie, in the fictional world of Mad Men, Don and Betty Draper looked like the bride and groom cake topper atop the Wedding Cake of Life. With Betty by his side, Don Draper brought the magic of Camelot to Madison Avenue. As a couple, they were imbued with the stuff that Ad Men attempt to crank out from that famous street.  Don was handsome, brilliant, powerful, the undisputed lord of the realm, much like President Kennedy in real life. Betty, similar in her patrician beauty to the First Lady, possessed every outward quality needed to be the rightful consort to such a hero. She was the fitting female accessory to drape on Draper’s arm.

We’re drawn to the glamour of Don and Betty, but it’s the hidden frailties of the characters that keep us glued to the storyline. We root for the redemption of the anti-hero who built his house on shifting sand. We see his victimization as a child. In his adult life, we catch glimpses of deep compassion in Don, as he witnesses and identifies with human frailties and failings in others. We are drawn to him in those moments of basic goodness. We long for that side of Don to prevail!

I’ve spent far too many episodes wishing and hoping for Betty to grow up and become the kind of woman that could truly love and accept Don – the Don I hoped that he might some day grow up to be.

That’s not going to happen this season, either, is my guess. I’m betting it’s Peggy’s turn: that she and Don will discover that they are, indeed, meant to be. She has needed to mature into who she was going to be, and Don has needed to learn to value the kind of woman that could actually make him happy. So…my money’s on Peggy, this season, and I’m not afraid to put my prediction out there. 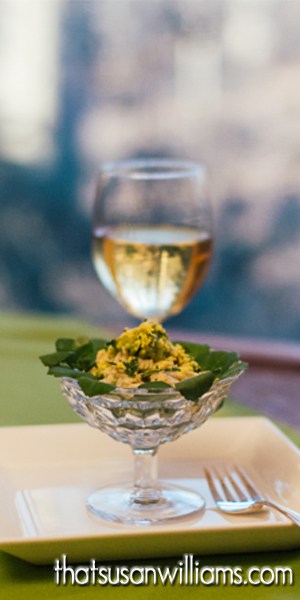 Avocado and Crabmeat Mimosa pairs nicely with a chilled glass of your favorite white.

IN THE MEANTIME.. on to the recipe!

I  wanted to make something really delicious from The Unofficial Mad Men Cookbook, because I like *all* my recipes, in fact, to actually BE delicious! I’m happy to say that this one fit that criterion. When I saw that this recipe had been developed by the White House chef René Verdon, the French chef hired by Jacqueline Kennedy at the White House, I figured it had to be good.

And that’s why my thoughts wandered to the Kennedys, as I sat down to share a recipe related to the TV series, Mad Men.

The Avocado Mimosa Showed Up On Mad Men

Betty Draper ordered a dish similar to this one in Season 2, episode 1, when she and Don were staying at the Savoy hotel on Valentine’s Day. From room service, she ordered an avocado half stuffed with crab meat. As she was ordering her meal, Jackie Kennedy was on TV, giving the nation a televised tour of the White House. See how it all fits together, seamlessly? Jack & Jackie, Don & Betty… and Avocado & Crab – which truly are two of my most favorite foods in the whole world. Elegant, and classic, this recipe is the perfect metaphor for what Don and Betty represent.

Isn’t A Mimosa a Cocktail?

The recipe’s name, “mimosa“, refers not to the orange juice/champagne cocktail with which many Americans are familiar, but to the French name for deviled eggs, which is Oeufs Mimosa (or Eggs Mimosa). Since the topping is made from the yolk of a hard cooked egg, I imagine that’s what Chef Verdon had in mind when he gave this recipe its title.

Use Fresh Crab Meat If You Can; If Not, Here’s My Tip

Fresh crabmeat is the best, but, if you can’t afford fresh, (and not many of us can at $20.00 a pound), you can get away with using canned lump crabmeat by using this simple trick that I learned from Cook’s Illustrated: drain the crabmeat well – you’ll want to get as much of that water out of it as you can, and then soak your crabmeat for about an hour in a cup of milk. Then squeeze the milk out, and the crabmeat is ready to be used in this recipe. It will really cut the fishy smell/taste that canned crab meat has.

I also found that, for seasoning, instead of just salt and pepper, that I enjoyed adding a bit of garlic salt to the egg yolks. (It’s the seasoning I typically use when I make guacamole.) 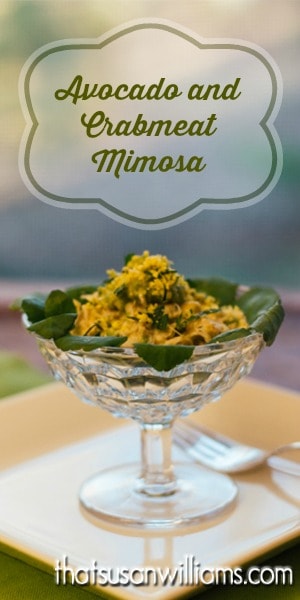 Avocado and Crabmeat Mimosa: a recipe fit for a president.

What recipe do you think of, when you think of the 60’s? How about fondue? An Authentic Swiss Fondue totally floats my boat, and you really need to check out my recipe!
And, please, share this post with your friends who might enjoy it! Tweet it on twitter! Or, pin the recipe on Pinterest!

Love the hack for canned crabmeat...can't wait to try that. Related: You know A LOT about Mad Men. I may have to go back and check it out!

Yeah, that tip for canned crabmeat is a game changer, for SURE!

I think of every kind of jello salad possible! But your writing about eggs, reminded me that my mother often made Creamed Eggs on Toast. It was some kind of creamy egg mixture ladled over white bread toast. It may not sound great, but I remember liking it. What I did NOT like was the slimy canned asparagus that was sometimes layered on top of the toast and topped with the eggs. Even now the thought of slimy canned asparagus makes me cringe!

I remember that dish, Caryl!!! And I always thought I hated asparagus, because I had never had fresh asparagus as a kid. Only that nasty, slimy canned/jarred stuff. Hideous!!!

Sounds yummy! I love crab and avocado! My recent post 7 Things I Loved About BAMC15

Crab meat ANYTHING is delish!

My mother used to always make a pistachio gelatin mold in the shape of a fish as the showstopping centerpiece of any ladies' lunch or bridge party.

LOL! I remember clearly such a mold. Putting food stuffs in a mold... it just doesn't sound good from the get-go, does it?