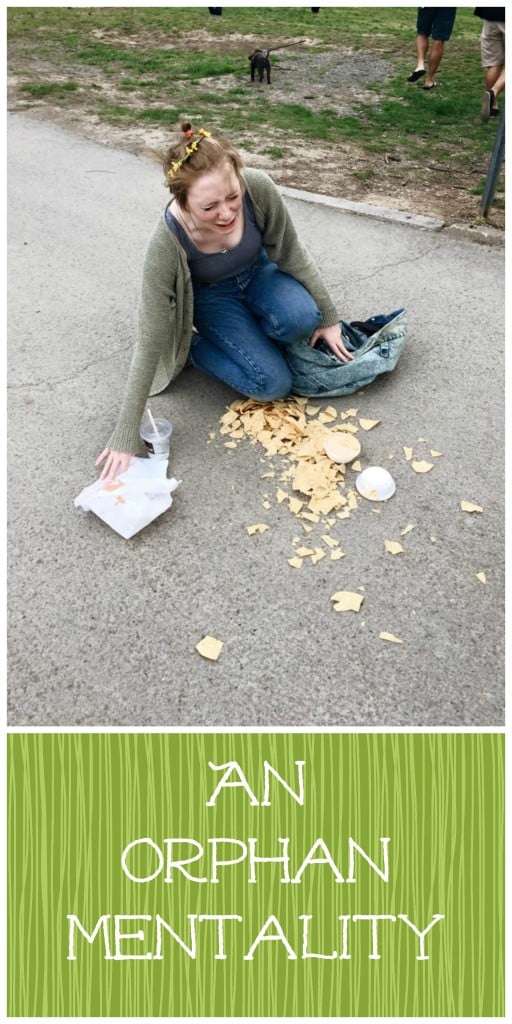 This hilarious picture of my daughter, snapped when her much-desired bag of chips and queso from San Antonio Taco Company busted, depicts the devastation of our world crashing down around us…well…sort of…but..I think you get the general drift of sadness and loss.

In the Friday morning ladies group that I attend, we’ve been tossing around the phrase, “orphan mentality”. It touched a nerve for me. Because too often, I catch myself living like I’m an orphan.

What do I mean? What is an “orphan mentality”? And where did we even come up with this terminology?

The night before Jesus’ crucifixion, according to the apostle John in John chapter 14,  while eating the Passover meal with his disciples, Jesus told them about his impending betrayal and departure from them, but promised that He wouldn’t leave them as orphans. In fact, He would come to them, in the form of the Holy Spirit.

Yesterday, while I was thinking about this, I wrote down some of the problems that an orphan faces.

Some Characteristics of an Orphan:

Even though literature and movies are filled with tales of plucky orphans who survive and thrive, in reality, if no parent is present to provide the basic human needs of food, clothing and shelter, not to mention the higher order needs we humans have for love, identity and security, the orphan has to try to find a way to make things happen on his/her own.

The orphan mentality, then, is one of striving, and loneliness:

“I have to make this happen.”

So how does this play out in my life? And maybe, while I’m sharing some of my “orphan thinking” with you, you’ll think of some areas where you might be dealing with similar thought patterns.

Let’s face it: there ARE certain things we DO have to do in life. As I’m writing this, it’s tax day: hello.

My refrigerator had TERRIBLE stuff GROWING underneath the produce bins, that I found on Saturday.  Sadly, I still had to clean that up. Jesus did not come and clean it up for me. (Although I wish He would have.) There are certain things in our lives that we must do.  We do have to take care of business.

BUT: the thought that we are all alone, with no resources of help to draw on? That’s orphan thinking.

Jesus promised his disciples that even though He was physically no longer going to be present with them, that they wouldn’t be left high and dry: he would not leave them alone, the way an orphan is.  Jesus said this Advocate that He would be sending would help them – would help us – and would be in them – and in us, forever.

The One who stretched out the heavens like a canopy, the One who brings out the starry host and calls each of them by name, the One who never grows tired or weary, and whose understanding no one can fathom? He is our Father. Jesus Himself is the way to the Father, and the Spirit of Jesus, that promised Advocate, is being sent and lives inside of believers.

We are not orphans. We are beloved children of the Father, the One who gives strength to the weary, and increases the power of the weak. Isaiah 40 says He tends His flock like a shepherd. He gathers the lambs in His arms, and carries them close to His heart. He gently leads those who have young.

My parents died, and my husband’s parents are both deceased, and I remember that when my Dad – our final remaining parent – died, I realized the terrible sense of grief and loss that comes with being an orphan. But even though both of our sets of earthly parents are missing from our lives, our heavenly Father is still with us, and the Spirit of Jesus is IN us. Orphans, we are not.

Where are you striving in your life? What thoughts do you catch yourself having that reflect that part of you believes that it is all up to you?

And what kind of frame of mind does this leave you in as you interact with those around you, constantly carrying around that heavy load of “I’ve gotta make it happen” with you, wherever you go.

You are not alone. You are not an orphan. Ask your Good Shepherd to lift you in His arms and carry you awhile. Ask Him for the strength and the power that you need to do what you must do.

Are there areas in your life lately where you’ve been using an orphan mentality?

This post resonates with me! Thanks for posting. As an adoptive parent I have witnessed orphan mentality in my children as well as myself. My blog, Yesterday's Orphan, speaks directly to parents of children with orphan and trauma histories who may have a hard time switching out of orphan mentality to that of beloved child. Visit at YesterdaysOrphan.org

POWERFUL INSIGHT IN THE ORPHAN MENTALITY