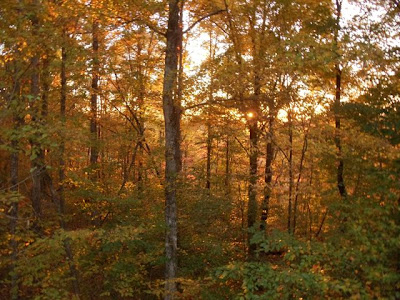 Fall has come to the Boonies.

Wish you could be here to see it!

And speaking of seeing glorious things….

(not a GREAT segue, but the best I can come up with to go with the pretty picture….and you know…I’ve been doing a study in the book of Isaiah, and sharing some of what I’ve received on my blog…so here we go with THAT portion of the program…)

What we see can forever change who we are.

Soldiers go off to war and witness terrible cruelties, and then must deal with those recurring images. Some of us have witnessed violent accidents, and we struggle to get those pictures to stop replaying in our minds.

By the same token, we can also be changed in positive ways by the things we see. I was fortunate enough to grow up in a home where I saw love lived out in front of me every day. It had its effect.

In the sixth chapter of Isaiah, the prophet Isaiah, who lived 700 years before Christ, saw a vision that forever changed him. Read those first four verses:

“Holy, holy, holy is the LORD Almighty;
the whole earth is full of his glory.”

At the sound of their voices the doorposts and thresholds shook and the temple was filled with smoke.

Isaiah, who happened to be the cousin of the king, who apparently had access to the king of Judah, who was therefore used to seeing royalty, saw a vision of the King of the Universe, enthroned in the temple, surrounded by flying heavenly creatures called seraphs (that name means, literally, “burning ones”). The seraphs called out to each other about the greatness of their King, and their voices were so powerful that the whole temple shook, and the temple itself filled with smoke. This is a scene of awesome, monumental grandeur.

How did what Isaiah saw affect him? Read on:

When Isaiah caught a vision of the power, the majesty, the sheer otherness of the King of the Universe, he was undone. He recognized his own position in relation to the holiness of God.

When we catch a glimpse of who we are in relation to the Creator of the Universe, it tends to whittle us down to size as well. This story illustrates that principle well:

I recently read this story, that the naturalist William Beebe used to tell about Teddy Roosevelt. At Sagamore Hill, after an evening of conversation,  Williams Beebe and Teddy Roosevelt would go out on the lawn and search the skies, looking for a particular group of stars, near the corner of the Great Square of Pegasus.  Roosevelt would then say: “That is the Spiral Galaxy in Andromeda. It is as large as our Milky Way. It is one of a hundred million galaxies. It consists of one hundred billion suns, each larger than our sun.” Then he’d grin and say, “Now I think we are small enough! Let’s go to bed.”

Now maybe you and I aren’t having celestial visions and prophetic dreams with God enthroned in the temple, and flying seraphs and earthquakes and smoke but, God does reveal who He is to each one of us, if only we have eyes to see. We can see Him in nature, in the beauty of the changing seasons, in the vastness of the ocean, in the intricacy of design in even the tiniest of creatures. He reveals Himself through the Bible, where we see His heart of love reaching out to man as a loving Father.

So, in a sense, what Isaiah saw can become what we see, too, if that is what we long to see. We can see our holy God, and we can see that an accurate assessment of our own position in relation to Him, is that we are of somewhat limited importance in the grand scheme of things.

But the beautiful thing about this chapter is that God didn’t just leave Isaiah there, feeling like an insignificant little worm. In love, He reached out to Isaiah, providing cleansing for his sin, and inviting Isaiah to become a participant in the plan of the Sovereign King of the universe.

Then one of the seraphs flew to me with a live coal in his hand, which he had taken with tongs from the altar. With it he touched my mouth and said, “See, this has touched your lips; your guilt is taken away and your sin atoned for.”

Then I heard the voice of the Lord saying, “Whom shall I send? And who will go for us?”
And I said, “Here am I. Send me!”

God reached out to take care of the problem that Isaiah saw he had: He was a man of unclean lips. And God provided the cleansing needed through the coal from the altar. (You MIGHT even say that Isaiah was altered by the altar…if you liked a bad pun….)In the same way, for all who come to Him, God still takes care of us by providing us with forgiveness, and a mission: to share that love with those who long for it.

The task that God had for Isaiah to do was tough. One might even describe it as Mission Impossible. He was to carry the message to Judah that they needed to turn back to God. And God told Isaiah that the people would not be responsive. But, Isaiah was not supposed to worry about the results. His job was to be God’s faithful messenger.

Guess what: we’re not supposed to concern ourselves with the results of what God calls us to do as parents, either. There’s not a one of us who can FORCE our kids into loving God, and living for God. Our job – (and it’s a long one, too! As parents, we are in this for the long haul!!!) is to faithfully give our children the message that God loves them, and longs to live in relationship with them, just as God loved Judah, and longed for that nation to turn back to Him and live in relationship with Him.

One more thing that I have been thinking about: Isaiah’s answer to the Lord was, “Here am I! Oh, Lord, send me!” With an exclamation point! Is that how I answer God? Not usually. Usually, I’m dragging my feet, and wondering how little I can get away with and it still be “enough”. Isaiah’s response to God challenges me to be more open to whatever God has for me to do. With enthusiasm!

May we, in our own lives, see what Isaiah saw.

Susan,I am enjoying your blog. You make me think and ponder and remind me of spiritual truths that I know, but have kind of locked away in my brain. So thank you.

Beautiful writing Susan...I particularly love your insight on parenthood...once again we're reminded to be a witness with our actions, not our words.

Love the new background for autumn!

I do enjoy reading your blog, even though I don't always take time to respond.

By the way, I love your blog. I feel the same way about wanting feedback. Looks like you are getting some good comments for each of your posts. I need to start copying some of your recipes.