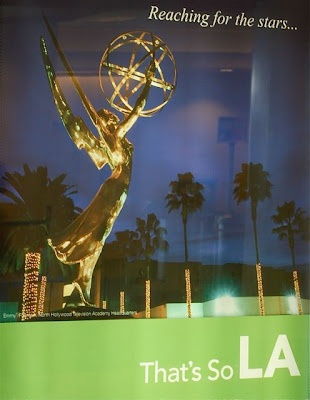 I guess I better get on this and spill the details before I forget any more of it than I already have.

I believe I left off at the point where the Big Bison and I went back to the hotel to relax a bit and get ready for our BIG NIGHT. The unending coverage of the funeral and burial services of Senator Ted Kennedy of Massachusetts were on, and by this point in the day, the funeral entourage having been socked in by the rain and fog at Boston’s Logan Airport and delayed for several hours, the poor commentators, waiting eternally for the casket to arrive at the capitol steps, were becoming somewhat desperate for something new, fresh, and important to say. They were resorting to telling tales of how they used to take their dates to the Lincoln Memorial by night in order to see the fabulous views of Arlington in one direction, and the reflecting pool, the Washington Monument, the mall, and the Capitol in the other direction, and how romantic this was (and yet free to any taxpayer!). Honestly, I started to feel kind of sorry for them…just how long can any musician vamp an intro, after all, when waiting for the singer to FINALLY remember the words and join in and sing the song? Tough gig.

Anyway, we finally got ready to go, and thanks to our friend Cheri, who gave us the inside scoop on getting the concierge to help us out at the hotel, we went down to the lobby to catch a ride in the hotel’s Lincoln Town Car. Who knew they would have such a thing available? The answer, of course, is Cheri. So, we snapped a few pictures in the lobby, 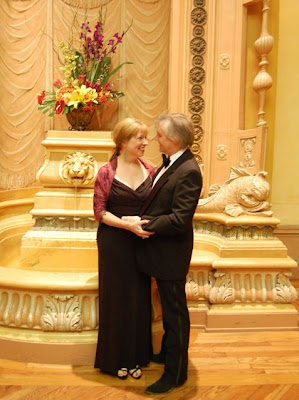 and then let our driver take us over to the Westin Bonaventure, where the ceremonies were being held.

The Big Bison did this piece of music for a music house in Nashville called 615 Music, and Randy, who is the head of 615, met us in the lobby as we checked in to pick up our tickets. They had the backdrop set up, where the notable hosts were having their pictures made, and the press was gathered making the flash bulbs flash at a woman I had never seen before, but who had some big honkin’ eyelashes on, with some very tight clothes. I still don’t know who she was, but the press seemed impressed, and they snapped away. The Big Bison, Randy and I then got the idea that this backdrop would afford us the perfect opportunity to snap a few pictures, so snap away we did. Here’s Randy and the BB. 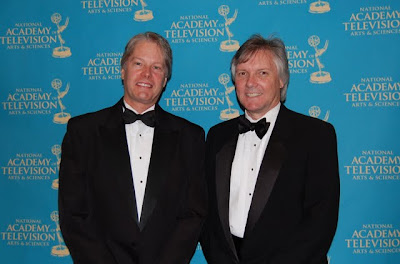 And the Big Bison and me: 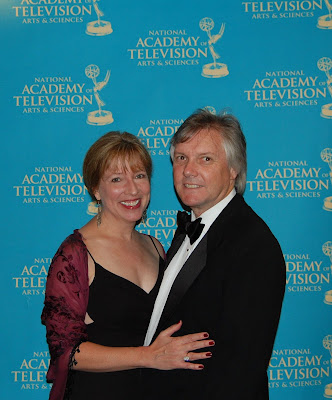 Shortly thereafter, the doors to the ballroom were opened, and we went in and took our seats. 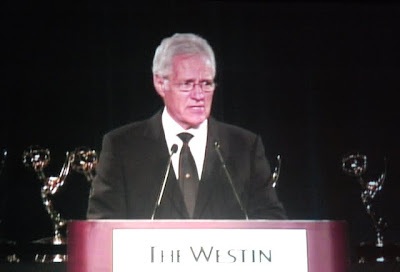 and he laid down the rules for how long speeches could be, and everyone abided nicely by those rules, so much so that the ceremony actually ended early. “Only” two hours instead of the three hours they had endured in years gone by. There were several other guest hosts: a soap opera actress from The Bold and The Beautiful, named Susan Flannery; cute little Nancy Cartwright, who plays the voice of Bart Simpson was witty and amusing. She was so short (and wearing a dress with spaghetti straps) that her shoulders barely came over the top of the podium. She told us that when she had been in for the sound check, earlier, she realized that if she slid her straps down off her shoulders (which she proceeded to do) she looked for all the world like she was standing up there without any clothes on. Now, THAT was amusing!

But my two favorite presenters I got to meet and talk to, so I’ll just go ahead and spill the beans: I met Elmo, or rather the man who OPERATES and speaks for Elmo, Kevin Clash, on Sesame Street. He was terribly funny, and amazingly quick witted in the ceremony, and so I told him how much I had enjoyed his performance, and then, the Big Bison asked if we might take his picture, which he obligingly offered to do.

Is he not just the cutest thing you’ve ever seen? Look at the twinkle in that man’s eye! You could tell this guy was enjoying himself immensely.

My other favorite presenter is because I am a PBS food show junkie, and it was the very adorable Ming Tsai, host of the PBS cooking show, “Simply Ming” . And, since he was standing right behind the table where I was sitting, chatting with “Elmo”, I waited for their conversation to end, and then, well, you know the rest… Please ignore as much as possible the crazed look in my eyes, (as in, “Check this out: I’m with Ming. Huh? Huh?”)

and look at that boyish grin on Ming’s face. He was delightful, and notice how I cracked him up by something I said. He was also a complete charmer. 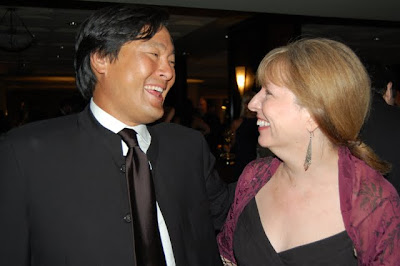 I had the BB take this next picture at the After Emmy’s party, because in a very strange way, it reminded me of a National Geographic photo. Let me explain. You know those photos that they take of tribal peoples where the chief is sitting there with his feathers, or his spear, or whatever other trophies of war he totes around to show his prowess as a warrior? Well, this guy, with his Chardonnay in one hand and his Emmy tucked oh-so-casually under his arm just seemed like a Southern California tribal chief photo if ever I’ve seen one… 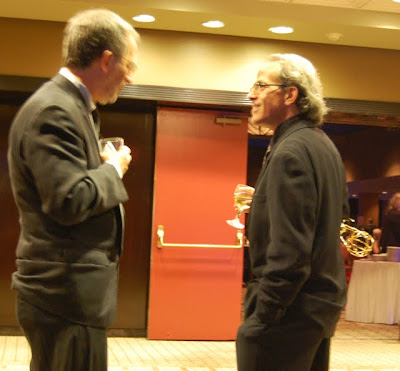 If you don’t follow my logic, though, I understand. My brain is just a little left of center…

So, there you have it. We lost, but we had a grand time. (The winner in our category – Best Original Song/Main Title & Promo – was the opening song to a show called 6Teen on Cartoon Network.) We rode back to our hotel in style when our driver arrived, and the Big Bison snapped a few more photos of me in the downstairs of the Biltmore. So here are a few of those, just for fun. 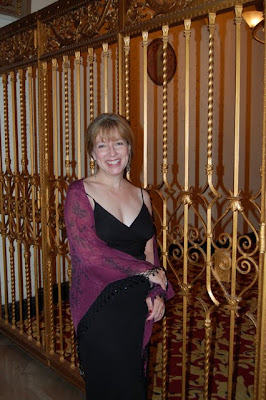 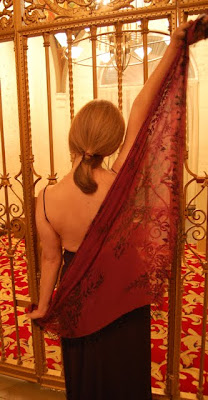 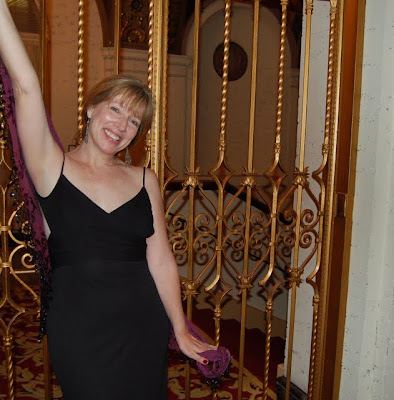 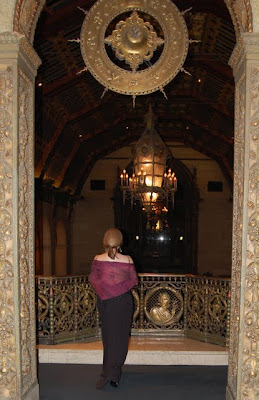 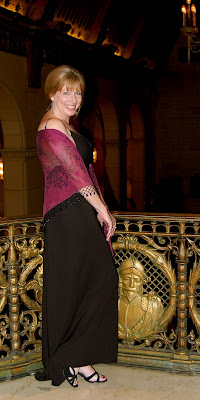 That, again, is our story, and we are totally sticking to it, no matter what else you might hear or read…wink, wink, nudge, nudge…

Thanks for coming along for the ride. It was a blast!

I think you look amazing!! :) and not in a crazed-fan kinda way.

Sounds amazing! I can't wait to show my husband what Elmo looks like. And I had no idea Bart Simpson was a girl. :)

How amazing!! I could never even dream of such an adventure and there you are living it! Wow!!

I love that you got pictures with some stars. :)

I think you looked absolutely marvelous in your dress!! I'm thrilled that your dear hubby would take such wonderful pictures of you at the hotel. How sweet!

And congrats! Terrific spot to be in!

Enjoyed your big adventure second hand and glad the shawl got to enjoy it as well...

FABULOUS DAHLINK!!! YOU looked AMAZING. I have such a smile on my face. :) Loveliness personified. And it's not just the dress!

Congrats on the adventure. :)