Saturday was a day of contrasts. We went from the site of the Summer of Love and total hippieness, across the Bay to the port of quaint and rampant yuppieness. From clouds into sunshine, and then back again. 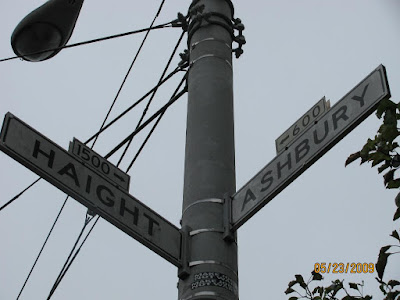 Saturday was our day in the car: a day of hurtling through time and space at breakneck speed. I ended up in the back seat on the ride into Haight Ashbury. Chloe is, (how shall I put this diplomatically?) an aggressive driver. I already knew this from riding around Huntington Beach with her last year. But California driving is not for the faint of heart. And she’s not a bad driver – she’s a good driver. (At the very least she’s been lucky when I’ve been with her.) But she gets where she wants to go and takes command doing so, if you know what I mean. So we zipped into the Haight, infamous locale of hippies and war protesters of the ’60’s, for breakfast about 9:30 Saturday morning. 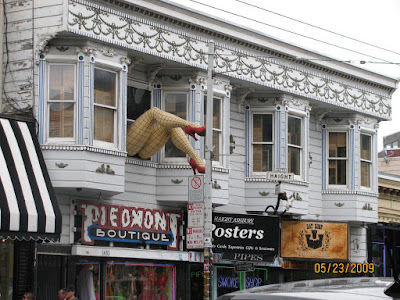 As we began walking down Haight Street, the smell of early morning marijuana drifted out the doorway of a local apartment, and hung soggily in the foggy morning air. Chloe took us to the People’s Cafe for a good breakfast – and they made great lattés, too. 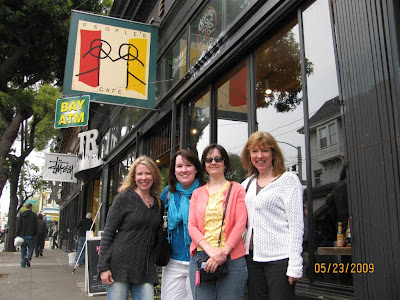 We chatted, and then decided to explore some of the boutiques and second hand stores that line the main drag there. And the boutiques were magnifique! Fun, and funky, and surprisingly reasonably priced. We each picked up a scarf while we were there. 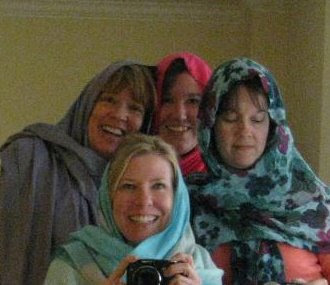 It was a little chilly (the whole trip was), and so Anne decided to go into a second hand store to search for a sweater. Now, I am all about finding treasures among the trash, but the racks of clothing I was perusing reminded me in a depressing way of my own closet, and the leftover stuff from the eighties that STILL hasn’t found its way to the Goodwill store. So, I passed on acquiring new what I already possess, and went to find some comfy foot attire. My feet like New Balance tennis shoes, and I found a shoe store that had half price sneakers in the back, and came home with a $120.00 pair of New Balance shoes for $35.00. Definitely a steal, and I’ve been enjoying them ever since. As we turned to search for someplace that would let us use their restroom facilities, a red haired lady staggered out of a bar, beamed at us, and slurred, “Can I just say that the Bloody Mary’s in there are superb? Absolutely superb.” W e thanked her for input, and walked on, somewhat bemused. By this time, the Huevos Rancheros I had eaten at the People’s Cafe with the kind of gray looking tortillas under the extra runny egg yolk were doing quite a number on my tummy: I was starting to look and feel about as gray as the tortillas, and as gray as the sky, so the need for a bathroom was becoming more urgent. One thing I have to say about San Francisco: they need more bathrooms. They just do. So, on we walked to the crèperie, where Robin ate a crèpe, and then, (I teased her) took a crèpe as well, making use of their facilities. I went back to the People’s Café and stood in line for their restroom for 15 minutes. By this time, my stomach had begun to roll like the sea, and my gray hue was taking on a decidedly green tinge. (Shades of the previous night’s play, no doubt.) Finally, it was my turn, and the restroom itself would have been enough to turn a non-nauseated person’s stomach, but anyway, one does what one must, and at last I was able to exit the vile place. I toyed with the idea of going back to the hotel and just lying around, but we were so close to the Golden Gate bridge at that point, and I really couldn’t bear the thought of my friends having fun without me, so I sucked it up, and was glad I did. 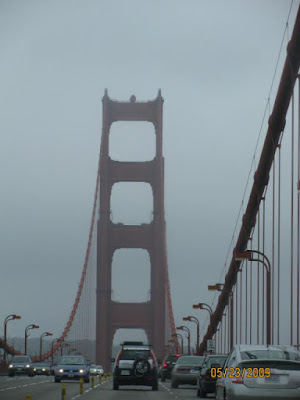 About this time, they gave me the front seat to help my nausea, a sacrifice I deeply appreciated, We climbed in the car, and drove over the Golden Gate bridge, which had really a bittersweet appeal for me, since I know someone who took his life there. And then, Chloe put in the One Hit Wonders of the Eighties CD that The Tick had made for her, and she and Anne sang blissfully along. Now, I don’t know if these girls have thought about this, but this IS my blog, and I get to say what I think:

Girls, there’s a reason these groups were one hit wonders. Have you thought about that? I don’t know what I was doing while Chloe and Anne were learning these songs. Maybe I was in Europe, without my own radio, and nothing but my college cassettes to entertain me. Maybe I had moved to Nashville, and was thick into the Contemporary Christian music genre scene. But I missed these One HIt Wonder groups and their songs, for the most part. And I’ll just say it out loud right here, and right now: I don’t think I missed out on too awful much. Techno pop crap, in my opinion. I was never so happy as when that CD finally got swapped out for ABBA. Now, I know a lot of YOU think ABBA is a form of torture, and I don’t want to argue about that, but in my book, the ear torture was over when Dancin’ Queen began. Everything is relative, isn’t it?

As we drove north away from San Francisco, the cloud wall evaporated, and we drove through sunny Marin County. What a pleasure! How beautiful! We were taking turns telling our story, and it seems like Robin’s story was the story du jour. I listened, I learned, I empathized. What a lovely woman, and what a fascinating story she has. We stopped in Sausalito, which is quaint, and lovely, and full of overpriced baubles, and one really good T-shirt shop, and Anne enjoyed her first view of the beautiful Pa-ceeeef-ic Ocean, which was a treat to get to experience with her. And we were accosted by Mother Earth loving save the planet type of handout asking individuals, but made it past them with out money intact. And then, began the never ending bathroom search again. Sausalito needs some more restrooms, too, by the way. 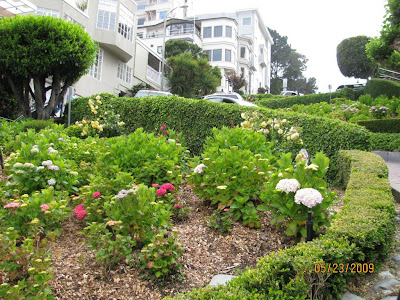 Back to the city we hurtled, while Chloe shared her story, and we waited in line for 20 minutes in her car to drive down Lombard Street, the curviest street in America. The trippiest part is that while you are waiting in line, it’s like you’re in a recliner with your feet elevated above your heart: that’s how steep the incline is to get up the hill on one side. Crazy.

So, after we finally got back to the hotel, and changed our clothes, it was time to meet my friend Gigi at a very famous San Francisco restaurant called The Cliff House. It is pretty far out, but it has a spectacular view of the ocean, and I knew the girls would love it. I’ve eaten there with Gigi in years gone by more than once, and have some lovely memories of the place, so I was looking forward to it. Robin volunteered to be our designated driver. And may I say, it’s a good thing she wasn’t liquoured up, because she gave Chloe a total run for her money in terms of possessing the ability to hurtle through intersections, and switch lanes with abandon. I was sitting in the back with Chloe, and saw her eyes getting big, and I just started laughing, and said something along the lines of: “Welcome to my world – strap in and hang on. We’ll get where we’re going, and quickly, too!” Robin, too, has years of California driving under her belt, and is as cool as a cucumber. It’s admirable, really. 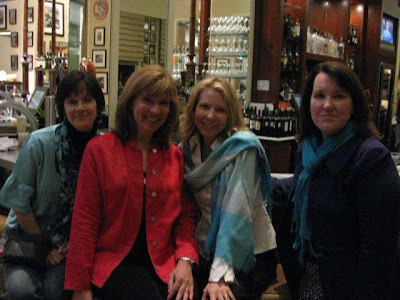 We met Gigi at the restaurant. We were a bit late, but it was all good, and she took some time to tell the girls about the history of the place. It really is OLD San Francisco, having had many rebirths. And I was so tickled to see my old friend enjoying my newer friends (I just knew she would), and vice versa – to see them enjoying my wild and crazy Gigi. It was really special. And you know, I think heaven will be so great: full of meeting wonderful, new friends that you will adore and get to enjoy forever.

And then we made it back to our room, exhausted, but hating the thought that departure was on us in the morning. The next morning is kind of a gray blur in my mind. I don’t remember much, apart from how depressed I felt to leave these wonderful women. I ended up with a snafu at the airport and didn’t get home till midnight, but that seems incidental, now. Just a sad portion of a sad day, in general.

But I’d go through that depression again in a heartbeat, if it meant I got to have the joy of the first several days. It was a rich, rich time. I can’t begin to express how great. It’s connecting with friends that brings joy to our journey, isn’t it? At least it brings so much joy to MY journey, anyway. 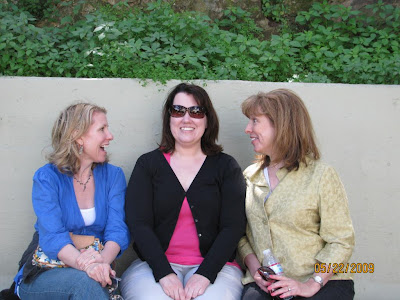 So, thanks for tuning in. It’s been fun (for me, anyway) strolling down memory lane with you. Even if the clouds overtook us a few times, the sunshine was magnificent.

I'm so glad that you all got to be together and have such a great experience. Sounds wonderful. Thanks for sharing it.

What great pictures, word pictures, and tributes to friends that aren't axe murderers...even though you met on the 'internet'.

I just love you guys so much!! I'm so happy that you got to have this special time with each other. Good friends are a true blessing. Thanks for sharing your memories Susan.

Anne "One Night In Bankok" Tastic

I thought I was a Charlotte, but Robin so out-Charlottes me.

She's so Charlotte, she doesn't quite know who that is.

Sorry about the 80's music. In my defense, one of those songs was written by the ABBA guys.

I really like Sausalito. Pretty little tourist trap, but clean and cute.

Next time, we really have to do an extra day. Not nearly enough time.

I'd give up NYC to do some place cheaper for an extra day.