So, my petite posse, Robin, Chloe and Anne came to pick me up chez Gigi, and they took a walk around her lovely home, and spent a few minutes chatting with her. If you read the comments on my last post, Anne said we stayed just long enough for Grady the cat to hiss her name. (Sorry, Anne, too good a joke. I couldn’t let it go unnoticed in the comments section.) And just long enough for them to see why Gigi is so precious to me.

And then we settled into Chloe’s built for speed mobile, and off we went for our big No Sex In The City trip to San Francisco. Anne had booked us a room in a lovely hotel up on Nob Hill called the Stanford Court, at an amazing deal through Priceline. Can I just tell you that it literally cost more to park the car there than it did to park our carcasses there?

The thing I hadn’t banked on was the cost of tipping the staff. I was all excited about our amazing deal in a 4 star hotel, but next time, I WILL remember to factor in all the car parking + tipping. I didn’t spend too much: I’m just sayin’: it’s something to take into account if you, too, plan a fun getaway in the big city with some of your best buds.

You do know, I think, most of you, how I met these friends of mine? We met on the internet, of course, where all the most solid relationships of today are born. (wink, wink) I met Anne in real life first, two summers ago when she was attending a wedding in my area. And that fall I met Chloe when her mother (who used to live in my general vicinity) was critically ill, and Chloe came to literally rescue her. And Robin and I met for the first time a year ago in May, when the four of us attended a sort of home schooling meet-up/3 day pajama party in Huntington Beach, CA. The four of us were roommates, and loved being together so much that we decided it HAD to happen again. And so about a year later, we agreed to meet up in San Francisco. I have a feeling next year could end up being an east coast meet-up, but nothing is set in stone, at present.

I’ll tell you one more little known fact about me: I think I have bad hot-tub karma. We talked and talked about hot tub parties we would have at the meet-up at Huntington Beach at the five star Hilton resort we were staying at there, And like a month before hand, we get a post-card telling us the pool would be closed. This year, we arrived at the Stanford Court and as we checked in, I inquired, and: NO HOT TUB, again. I think I must jinx things. I don’t know.

The thing I love about these girls is that they are witty, fun-loving, well-educated, God loving, compassionate, hilariously delightful human beings. But apart from that, they stink. Kidding! I am so kidding. And we’re all mothers of teenaged boys – which gives us immediate common ground. I’m the oldest of the four of us, with the youngest kids. ~sigh~ That’s what I get for taking a decade to travel the world and work and go to grad school. Poor me, right? But we all love our kids passionately, which is another thing we have in common. Enough to want to stay home with them and try to help educate them. 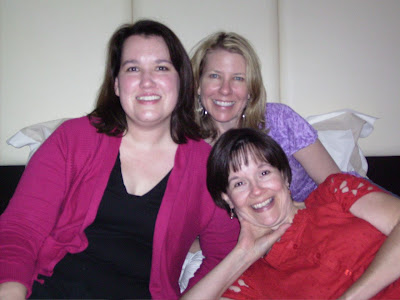 So, anyway, that’s how I came to be tooling along through downtown San Francisco at warp speed with Chloe, Robin, and Anne. We settled in to our room, after tipping ChaCha the bellhop, and Raoul, the valet-who-never-sleeps,
handsomely, and pondered where to eat. Chloe had been in the big city about a month prior to our visit, and when the androidish looking woman behind the desk recommended the same restaurant Chloe had taken her son to, a little Italian restaurant around the corner from our hotel called the Nob Hill Café, it seemed meant to be. So we ordered pasta, and soaked up the local ambiance.

As we left, the wind was whipping on the top of Nob Hill, and it was fast becoming clear to me that I really hadn’t packed enough warm stuff. And Chloe needed a toothbrush and toothpaste, and so began our first tramp down the steeps of Nob Hill. Did you know that in the Walgreens of Nob Hill, they LOCK UP the TOOTHBRUSHES AND TOOTHPASTE??? I think it might have been to keep the homeless people from swiping them, unless there’s some obscure California code that requires this, but I don’t think there is one. Chloe, a Californian, seemed just as surprised as the rest of us.

So, we hiked our tails back up the hill, and talked and talked and talked. But went to bed at a reasonable hour, because my dear husband had threatened these women to never let me come out to play again if I came back sick. And we held to his request. God bless him.

The next morning, we breakfasted at Pete’s Coffee, in the basement of Grace Cathedral, and then went upstairs and toured that beautiful church. I think I enjoyed visiting that place as much as anything else I did. It was so beautiful, and peaceful. The walls were covered with murals depicting the history of San Francisco, and they had been painted by artists whose styles varied greatly, from mural to mural. I just loved that.

And then, we began what became affectionately known as the San Francisco version of the Bataan Death March. Down Nob Hill we hiked, past Chinatown, and through Little Italy. We stopped to buy water bottles, and Robin wanted to linger a few moments, just to appreciate the sheer beauty of the tall, handsome bartender who waited on us, who, may I say, was well worth looking at. But Chloe dragged her out of the bar (heh, heh, that makes it sound a little worse than it was…), and it was onward and upward, oh, so very upward, to Telegraph Hill and Coit Tower. We were seven eighths of the way up the hill, when I realized that my new Crocs were carving out a hole in the top of my foot, and a band-aid was advisable. Nurse Chloe to the rescue. She charged into a Chinese speaking school, and came back bearing a multitude of band-aids, and I applied several, and I think Anne may have applied one or two herself, and then, back up the hill we climbed. The murals in Coit Tower, done by the WPA during the Great Depression were absolutely fabulous expressions of folk art. And we met a young lady who was an ad exec from NYC, touring just for fun. When she found out about us: that we were homeschool moms who met on the internet, you could have scraped her pretty little jaw off Coit Tower’s floor, and I like to think that we perhaps abolished one woman’s former stereotype of homeschoolers that morning. We rode the elevator to the top, enjoyed the view, and then, on to Fisherman’s Wharf for lunch.

We ate sourdough at Boudin’s, bought socks for our weary feet, bought fresh cherries to snack on back in the room, bought Robin some pretty silver earrings for her outfit that night, and then, back up the hill for Irish Coffee at the Buena Vista Café, where we had a marvelous view of the water. Can I tell you what a beautiful day it was? Just spectacular. Then we walked to Trader Joe’s to procure some yummy cheese, and some wine, and then, began the death march in earnest, all the way back up, up, UP to the top of Nob Hill. Anne was fading, I could see it, and I tried to distract her attention from her pain by getting her to tell me about her kids, but the woman was hurting, and doing the kind of focused breathing that they teach you in LaMaze classes to keep you from murdering your husband, so really, I should have left the poor dear alone., She says she was in the zone. I say she was in the zone of suffering that only a really good Catholic girl can bear well. But bear it, she did, and we made it back to our room. Never has sesame garlic bread, smoked gouda, fresh cherries, and a lovely Sauvignon Blanc tasted so sumptuously luscious. Heaven. 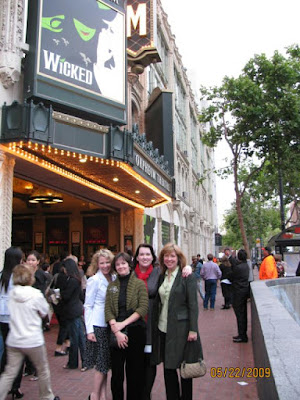 Then, time to get ready for our Big Night Out. Robin had procured tickets to the Musical Wicked for us, which was wonderful, wonderful, wonderful. The music, the voices, the costumes, the lighting, the script: oh, my dears. Everything you might hope for in a big night out at a play in one of the world’s great cities. Even the taxi ride was elegant. Honestly, I could really get used to being spoiled like that. Truly.

I know this is WAY too much detail. Too many notes, as the Austrian emperor said to Mozart in Amadeus.

I’ll comfort myself by saying that I”m probably only writing this for me.

But it’s my blog, and when I’m old and gray, and can’t remember anymore, I’ll read back over this and say: “Wow! I had some fun times, once, didn’t I?”

Maybe I’ll tell about the second day later. Or not.

Chloe, may her name be forever praised, wore sneakers on the Bataan Death March, because she was wiser than I was.

I bet you a million Lempiras that CHLOE wasn't caught dead in them. :)

I did, and so did Robin.

How the mighty are fallen in your estimation? Feet of clay, feet of foam, 6 of one, 1/2 dozen of another.

I'm so wickedly jealous of your posse - but pleased as punch at your 'sharing' them with us. :)

WHAT a dreamy 'girls' weekend. You go girls!

And for clarification - Did you say you wore CROCS in San Francisco??? Shudder, shudder....

I think Anne and I both are certified Anglophiles, and would kill to travel to London together. We'd be doing Martha Grimes pub crawls together, and Jane Austen tours of the whole country.

What a dreamy idea!!!