Well, I think I’m ready to write about my trip to San Francisco, now.. Because it was such a monumental experience, that I’m afraid if I don’t get busy and write about it, it will fade into oblivion.

This trip was originally planned strictly for pleasure, but (thank Him!) God’s ways are not my ways, and God had bigger fish for me to fry than just me having a good time. Which I also managed to do, by the way.

And it all happened because I have a really smart and sensitive to the Holy Spirit kind of husband, and because we were trying to be good stewards of the money He has entrusted to us.

The Big Bison said I could go to San Francisco to play with my friends Anne, and Chloe, and Robin (ABC order, don’tcha know). And he said I could use up some of our frequent flyer miles to do it. So, in trying to book the trip for some specific dates in May, I simply could not get the departure date I NEEDED. And the BB said, “Well, ya know, you could call Gigi to see if you could go a day early and stay with her.” Gigi is my dear friend from college who lives in the San Francisco area. I felt really awful doing that, since I hadn’t talked with her in seven years, and here I was calling her out of the blue to ask if I could crash at her pad. But to take advantage of a free ticket, it seemed the only way.

So I called her, identified myself, and asked her how she was doing, and she said in a ragged voice that she was hanging in there, and then I asked “What is it?”, and then, through many tears, she told me how her dear 19 year old son had passed away. And then, she told me that due to an awful mix of depression and drugs, he had taken his life. I cannot express to you how terribly, terribly awful and deep her grief is, and how glad I was that my dear, dear husband had prodded me to call her. To let you know how dear that man is to me, he urged me to go a day early, because maybe that was what this trip to San Francisco was all about anyway.

So, at Gigi’s invitation, I did go out two days earlier than my trip with Anne, Chloe, and Robin. And it was the sweetest, sweetest time. Here’s a sampling of what my time with Gigi was like. I walked into her home and was greeted by the most hilarious crew of animals to have entertained me in a long time, and I’ll include their pictures here, too. Sebastian, the Prince Charles Cavalier, who looked at me with the most soulful eyes I have ever seen. With his eyes, he beseeched me, “Love me. Love me. I adore you. Love me.” The only thing about those soulful eyes, is that one of them wanders to the left, and they kind of bug out, so it’s a lot like having Marty Feldman gazing longingly into your eyes. 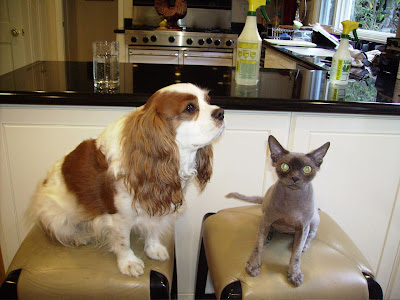 Sugar, the bulldog, was a constant source of snorting, snuffling, grunting hilarity. She just cracked me up by making the most pig like noises, constantly. 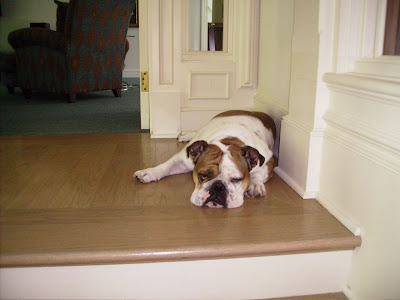 And Grady, the Devon Rex (oops!) hairless cat, who wasn’t really supposed to be hairless, I don’t think. His coat felt like a warm suede hot water bottle. And he reminded me of an animated stick figure cat, all eyes and ears and scrawny body. Grady had a thing for toilet seats, too. 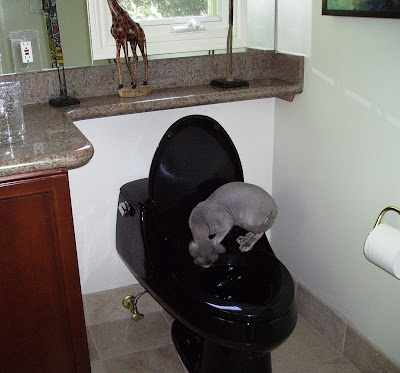 I arrived late at night, and after being greeted by the animal welcoming committee, I hugged Gigi’s dear husband. And then I hugged her 15 year old daughter. And as I looked into her beautiful young face, I saw her mother’s eyes gazing back at me, the Gigi I knew in college 30 years ago (can that be right?), and I nearly busted up crying right then. How does time do this to us??? Why must we age, and lose our freshness, and vitality?

So, Gigi sat me down in her kitchen, and fixed me the very best chai latte I have ever had in my life, and a piece of sourdough toast with guava jelly, and white cheddar cheese, and if that isn’t the food of the gods, I don’t know what is. I had a lot of spectacular food in San Francisco, but I’ve got to say that that late night snack in Gigi’s kitchen was my culinary pinnacle. Maybe because it was served with such love? I don’t know. I think the bread was gourmet and the combination of guava jelly and white cheddar cheese (the way the Turks do it: sweet jelly with salty cheese on great bread) just tripped my trigger. Love sweet and salty together.

We talked till 2:00 in the morning, California time, which was 4:00AM my time, and I tell you: if you ever want to hear a story of God’s amazing grace, and redeeming love, talk to my friend Gigi. She herself is a walking talking testimony to it. She has lived through hell and back again, several times over. Much more than one person ought to have to bear. But God….(I love whenever I see that phrase in the Bible) But God, in His redeeming love, has held her close, and kept her His.

The next day, we went to her church’s Bible study, and I got to meet her little discussion group, and hear wonderful testimonies of what studying the book of John had meant to these women. My favorite testimony came from a woman from Taiwan, whose English was very minimal – very broken – and very heavily accented. The class was losing its teaching leader: she is moving to the other side of the country. And so everyone was very sentimental about losing Pat. The Taiwanese lady stood up and said haltingly: “I have been in this Bible study for a year, and I love Pat. This year is over, and I still don’t know Pat. But through listening to Pat, I know Jesus.” Oh, my tear duct floodgates opened wide on that one. Wouldn’t that be the most beautiful thing anyone could ever say about you???

After the Bible study in the morning, Gigi treated me to a manicure and pedicure, and we strolled around a little town in the Bay area whose name escapes me, but which had killer shopping. And then we picked up her dear daughter after school, and went to where her horse is stabled on a mountain near Half Moon Bay, and I had the pleasure of watching her daughter ride, and be trained (as she trained her horse) to do what is known as dressage, which is really a lot like horse ballet. It was lovely to watch, and lovely to meet the trainer, Georgia. Georgia communicated with Gigi’s daughter while she was up on the horse’s back through a head set. So as Gigi’s daughter was riding, she was getting constant feedback from Georgia, about how to train the horse to get him to do what he should. And I thought, wouldn’t it be grand if as we went through life, we could get instantaneous feedback from the Holy Spirit on how we were doing. Clear direction on how to handle various situations. And warnings about what to watch out for, and what NOT to miss out on. That’s the tricky thing about the faith walk, and keeping in step with the Spirit: it really does take faith. But Jesus says His sheep know His voice. It’s a challenge to me to remind myself DAILY, maybe hourly, to LISTEN to what the Spirit would have me do. 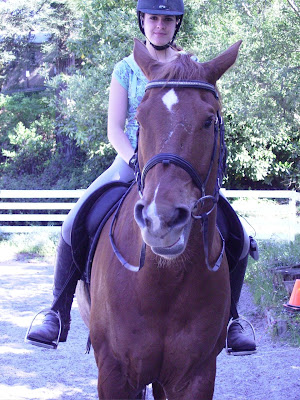 We drove down the mountain into Half Moon Bay, to the Ritz-Carlton, where we had dinner with the most wonderful view of the ocean, and then after dinner, we walked down to the fire pit near the beach, where some honeymooners invited us to have a seat in the Adirondack chairs. We covered up with some blankets, and sat with them and chatted, listening to the waves, and counting the stars, until the cloud bank rolled in. Rocky Raccoon made an appearance, and the valet told me later that Rocky had a great fondness for the S’more fixin’s that people ate by the fire pits, and once Rocky wandered into one of the private cottages, and stole an entire pizza. He WAS a chubby coon, I must say.

The next morning, Gigi and I watched her son’s memorial service, and sobbed like babies, and talked about him. He was SO much more than his death, which was really just a very, very permanent decision made on a bad day. But that is NOT who he was as a human being. He was so much more than that. And if nothing else gets said, I think that that is the most important thing to say about most people who take their lives. They made a terrible decision, on a very bad day. But try not to remember them for that: remember them for who they were.

And then, my dear friends Anne, and Chloe, and Robin came to pick me up, and I said goodbye to my buddy Gigi.

I came hoping to be a blessing to her. But wasn’t I the blessed one? Wasn’t I the one who walked away having been loved and pampered and petted on?

God is good. And he puts very special people in our path. And Gigi is one of the best and the brightest. Here’s to you, Gige. 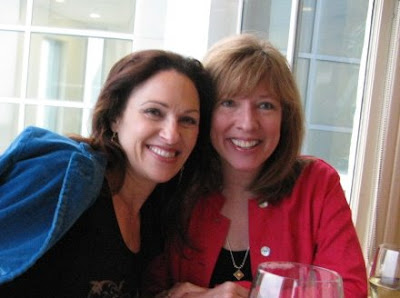 More about the rest of my trip later.

LOL at Anne's 'hiss' comment. I really liked the live gargoyle cat.Your memory is a good 'un, Sooze. If I had waited this long to write about the trip - who KNOWS what would have been remembered (or made up).You and Gigi are gorgeous!!

I loved meeting Gigi and seeing pictures of you two in college, looking *exactly* the same except for your Dorothy Hamill shingled bobs and your Lawrence Welk-backup singer outfits.Lost your freshness and vitality? I don't think so.That cat was cute and freaky at the same time. I think it hissed my name.I wanted to steal the dogs and sneak them home in the overhead compartment.

What an amazing blessing for both of you. God is good all the time!

Amazing blessed you both are to have each other as friends and yes that was G*D timing re the ticket. Well done to BB for recognizing it.Thanks for raising my spirits on a tough day!

You've got me in tears, Sooz. Can't wait to read the rest!Love you,Kristi