We had a hard day today.

The other night, after a very stormy day, our electric fence alarm started screaming, indicating that somewhere around the perimeter the dog fence line might be broken. We unplugged the fence to silence the alarm, since it was late at night, and then, since we were going out of town the next day, we didn’t have time to track down where the break might be before we left.

We got back from our trip on Sunday night, and our doggies were delighted to see us, and all was well.

My husband went downstairs to make us coffee, and to let the dogs out the door.

But Deakie Boy didn’t come back.

Deacon D. Dawg is our 12 year old white “yellow” Labrador. He’s been on what we’ve suspected was borrowed time for over 6 months. Six months ago, his sister, Gracie, who belonged to our good friends, passed away, and we’ve known that genetically speaking, his time was drawing nigh. He lies around like a huge white furry beached whale most of the day, with the exception of his daily dash (3x a day) to the food bowl. When he moves much beyond that, his breathing becomes harsh and labored, and it takes him a long, long time to settle down and catch his breath.

This morning, Deacon apparently discovered the breach in the fence, and decided to take himself out on one of his old adventures, but it was too much for the old feller.

He collapsed about a half a block away from our house.

Then, the lady who had been pet-sitting for us, and who was in the neighborhood caring for someone else’s pet,  came wheeling into our driveway, and told us she had seen Deakie, and he was in a terrible way. He couldn’t get up, had thrown up, and was foaming at the mouth, unable to catch his breath.

Just at that moment, my son drove up, found him, got him in the car, and brought him home.

His breathing was awful: he was laboring terribly to breathe. He wouldn’t take water, or even an ice cube. He couldn’t settle down, even after several minutes. We made a decision to drive him down the hill to the vet, and warned the children to say their goodbyes to their puppy, in case things were as grave as they seemed to be.

On the way, we called the vet, and warned them we were on the way, and that things looked grim.

Based on his symptoms, our wonderful vet presented us with 3 possible diagnoses. The treatment for the first would require extensive exploratory surgery, and given his difficulty breathing, the anesthesia alone would likely kill him. The other two options involved a steroid injection and a sedative, which would likely be a stop-gap measure, preventing death for a completely unknowable amount of time. A few hours? A few days? A few weeks? A few months? Hard to know. He’s an elderly dog, with what could very likely be a terminal disease. Option 3, given the panic in his eyes, and his inability to breathe, was to go ahead and put him to sleep.

His tongue was purple, indicating that he was not getting the oxygen he needed. He was afraid, and thus couldn’t calm down. We were devastated, and after talking out the options with our vet, made the terrible decision to go ahead and put him down.

My husband called the kids at home, and told them to drive on down to the vet’s office (a 15 minute drive) if they wanted to say goodbye. They said they wanted to, and so we asked the vet for 15 more minutes with him.

The vet and the vet tech went out and got the syringe with the medicine in it to put him down,  and a blanket for him to lie on. Each member of the staff of the hospital came in to pet him, and say goodbye. We were all crying. I was lying on the floor beside Deakie, talking to the staff and to him about what a good boy he has been, and about how soft his coat is, how even after 12 years, Deacon still has his puppy fur. I told him how sorry I was that we hadn’t given him a few weeks worth of eating steak, and letting him up on the couch, and leaving the garbage can lid open for him.

And then, as I continued to lie with him on the floor, and kiss, and pet him, and talk to him, I noticed his tail began to wave, just at the tip. And then, I said, “Is his tongue beginning to pink up?”. Because, it seemed to me that it had. And then, he lifted his head. I think he heard the “ding dong” alarm that goes off in the office every time someone opens the door. And then, my husband went out to get the kids, to tell them where we were, back in the exam room. And then, Deakie’s tail started genuinely wagging.

Deakie Boy hauled his great walrus self up off the floor, and stood at the door, where his master had exited moments before, with his head cocked to the side, in his Labradorian way of standing with his head right in front of the door crack, and so that you can just HEAR him thinking, “Door. Door. Door.”.

His tongue was completely pink, his breathing eased, and if there had been a thought bubble above his head, it would have said, “I’m not dead yet. I feel happeeee…”.

The vet and I looked at each other in amazement, our eyes wide as they could be.

And then my husband and the kids walked in. And Deakie wagged at them, happily.

And the vet said, “I can’t put a dog down who looks that good! When he’s standing at the door, wagging and ready to go…”

So, she gave him a shot of steroids, and a mild sedative, to help him sleep things off, because Labradors actually all come pretty close to needing sedatives when they are in the best of health, and we brought him home.

And we fixed the fence.

Deakie cheated death today. He dodged a bullet that was bearing his name, rank, and dog tag serial number.

We don’t know how much longer he’ll be with us, but tonight? Tonight, he’s sleeping beside my chair as I type. 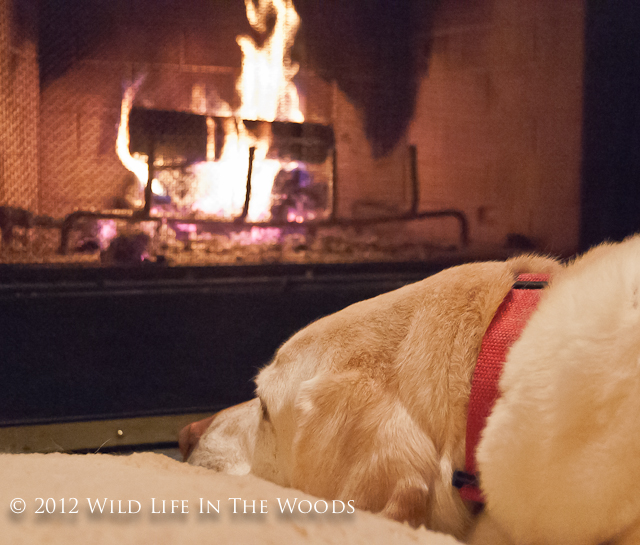 And tonight, I’m grateful that my Lazarus came forth.

Oh, death, for a little while, anyway, go bother somebody else. No victory for you tonight in these parts.