With apologies to the Bee Gees, of course!

I’ve looked back over the posts recounting my dear husband, the Big Bison’s heart attack, and I don’t want to give away how fast I am approaching senility, by telling the same stories, over and over again, so I am going to try to be careful NOT to do that. By the same token, I do realize that there will be readers who will stumble in to the story mid-stream, as it were, and I do want to be considerate to them.

If you’re a new reader, you’ll find Part 1 recounted in Heart Break, Part 2 of the saga is in Heart Broke, which leads us to today’s offering, “How Can You Mend a Broken Heart?”. And, well one might ask. Because it certainly didn’t turn out to be as easy as we hoped. But on the other hand, it turned out to be much easier than we feared. Many of the details that I’m not going to go into today have already been told in “The Big Bison is on the Move“, so that’s available for your further perusal, if you can’t get enough of the “drah – ma”, as they say.

To pick up the thread where I left it dangling in Heart Broke, bypass surgery was what was required. We found out after the fact that my dear husband had been assigned an amazing surgeon, (the guy does heart transplants!) who is young enough to be cutting edge (pardon the pun) but old enough to totally know what he’s doing. He told us he planned to do a minimally invasive procedure, whereby he would enter between the ribs right under the left nipple with a 3″ incision, spread those ribs, and cut, slice, and dice to work cardiac magic, bringing the left mammary artery down to meet the left anterior descending artery, located on the front of the heart. Our response? Not cutting open the sternum? Not leaving a foot long scar? Not taking veins out of both legs? Not stopping the heart? Not going on a heart/lung bypass machine???  Sounds good!!! You go, doc!

(So the answer to the question of “How Can You Mend a Broken Heart?, in our case, was “minimally invasive cardiac bypass surgery”, thank you very much.)

Sometime on Wednesday, as we all sat around waiting for my husband’s blood to thicken up, which is a lot like waiting for paint to dry, or watching grass grow, but a lot more stressful, the whole family was sitting around in the hospital room. There was a dry erase whiteboard on the wall, which had a chart on it (wish I had a picture! but I’ll try to recreate it as best I can. It went something like this:

Now, my dear son is 17, and if you know anything about guys, and anything in particular about 17 year old guys, they are COMPETITIVE. Hence, my dear son’s next remark:

Snorting and giggling commences from the female portion/peanut gallery of the room.

BB: “Son, you do NOT want to get into a pissing match with me.”

Talk about your mot juste. How often does one get to use that phrase with such a LITERAL exactitude of correctness? It was a moment of both metaphorical and literal magnificence.

You may remember that the surgery was called off (Thursday night) the night before the day it was to actually have occurred (Friday). We got the call at 9:30 in the evening, because “an emergency surgery had come up that would take the doctor all day to do”. Bummer, especially because that meant putting off the surgery till 4 days later on Monday. Which would have meant four more days of tension, watching the cardiac paint dry.

But, then, surprise! At 6 AM the next morning (Friday), waking me out of a dead sleep, came the phone call that said, “Whoops! That surgery we told you about is OFF. Wanna go ahead?”

(Quick! Wake up, out of that Ambien-induced sleep, Susan, and make a life or death decision in regard to your husband’s life!!!)

So I drug my sleeping kids from their beds and WHISKED them off to the hospital, 35 minutes away, and when we got there to say “Bon Voyage!” to Daddy, my dear son had not even yet had time to go to the bathroom. Two minutes later, he exits his Daddy’s bathroom, VICTORIOUSLY brandishing a plastic graduated urinal jug, holding 500 ml of his very own urine.

I had a few minutes to pray with my guy, alone, before his surgery, and I whispered my prayer in his ear, as we stood alone in his hospital room, holding each other, knowing that we ourselves were being held in the hands of the Almighty Creator of the Universe, who also happens to be our loving Father in heaven.

“Lord, take care of this man, who IS my heart. Take care of his heart, as he has so faithfully cared for mine, for 23 years of marriage. Keep that heart beating strong, and bring us back together soon, two hearts beating as one, you in us, and us in you.”

A picture from my sister-in-law’s iphone, right before they wheeled my heart out the door: 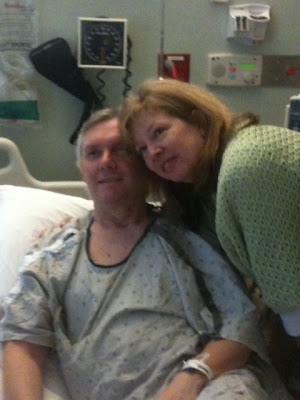 Sharon Greenthal is my daughter. This is how your amazing post, How Can You Mend a Broken Heart? popped up. You, a total stranger, brought tears to my eyes. You are a wonderful writer and I am sure a wonderful wife and mother. Just wanted to let you know that you really touched me and MY heart. Much love, Judy Williamson

Judy, thank you so much! That means the world to me!

I cannnot believe that your son challenged his father to a pissimg match before his heart surgery. That's such a funny and dear memory and I'm sure it lightened the heavy mood.

My heart was on hold as I read your tale even though I know it had a happy ending. But you've told it so well. I am so very sorry you've been through this.

You must have been so frightened. And clearly, your family's collective sense of humour does much to keep you going. Loved the pissing contest, and victorious son. :)

Finally got a chance to catch up on the whole story. Wow! I'm so happy for the warning call and successful surgery! Praying for BB and all of you as he continues to recover.

I already commented on your FB page, but wanted to see if it’s going to let me comment here.

You make me laugh and cry, dear friend. Sometimes at the same time. “That’s my favorite emotion; laughter through tears.”