I went to an extremely upright Christian Junior College. Really, really uptight. And they had rules in regard to Public Displays of Affection. No huggie, no kissie,…(and if you are of a certain age, now THAT song’s playing through your head)….well, at least, not in public. Which caused most couples there that I knew to scurry like cockroaches  to the darkest corners of the campus to say their loooooong goodnights. But even if you weren’t at present dating anyone, most girls I knew longed for nothing more than to be hotly pursued by the Hugging Police, who would perhaps, if the girl was really, really lucky, find them guilty of PDA: Public Displays of Affection. (No, there weren’t OFFICIAL Hugging Police, but teachers were likely to call you down for it.)

Fast forward 10 years: I met and began dating my wonderful future husband, the Big Bison, and we engaged in quite a bit of PDA. Enough so, that we decided that PDA for life was in order, and we got hitched. We enjoyed 7 years of childless PDA and marital bliss, PDAing to our heart’s content, and then, came our very first living and breathing product of PDA: our son, who is now a 17 year old Man Cub. 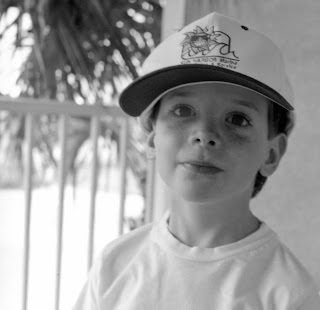 Back in his toddler days, my boy was inordinately fond of a particular soft baseball style cap. He wore that cap, day in, day out. We had to make him take it off at bedtime. It gave him a jaunty air. I think it may have reminded him of Rolf, the Nazi soldier boy with whom Liesl exchanged PDA in the Sound of Music. He watched that movie at lunchtime, the exciting part where Rolf rats the Von Trapp family  out to the Nazis (“Lieutenant!!!”) day, after day, after day. He even wanted a whistle to wear around his neck like Rolf had.

One day, the BB and I were standing in the kitchen exchanging PDA, and my toddler man cub came around the corner, and saw us standing at the kitchen sink, enjoying a long, lingering embrace. “STOP HUGGING!!!” came the imperial command from the two foot tall toddler in the baseball cap with the outstretched arm, and the pointing finger,  which caused us to dissolve into a fit of giggles. Caught again!!! In my own house!!! Dang!!! I really thought at SOME point, I would be old enough to escape the clutches of the Hugging Police, but no, they were on my tail again.

My friend Anne says that there is scientific research to back up the claim that PDA/hugging is GOOD for you. She says that you need to do at least a 30 second hug in order to obtain the endorphin release that is so good for your body chemistry, and so every day when her husband comes home, they endeavor to engage in a good long 30 second hug. I don’t know if the Hugging Police come around at her house to try to discourage this good work, but it wouldn’t surprise me one bit. Somebody’s always out to spoil a good time, not to mention a perfectly good endorphin rush.

Which leads me to the little incident that spurred this post. Back in November, the Man Cub and his friend Chris had an adventure, in which they pushed and drug this chair, a casualty of the May floods in Nashville, one mile uphill from the creek. It was buried in brush at a bend in the creek, and six months after the flood, since no one had claimed it, they harvested it out of the brush pile, and brought it to our house, where it now resides on our porch.

(Much more utilitarian than having a puppy follow you home. And we don’t have to feed it or take it on walks.)

So this chair sits on our porch, and despite having one warped arm, and wobbling a bit, it is actually quite comfortable, and we have been enjoying our lovely view of life here in the Boonies from the comfort of that chair. The sunsets, since our porch faces west, are particularly nice. 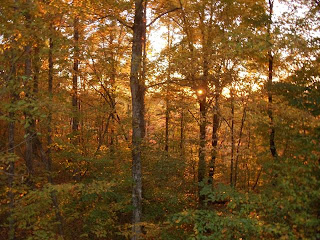 Last night, in fact, the BB and I were sitting in that chair, admiring the sunset, and I had occasion to wrap my arm around my Bison and place my head on his surprisingly non-hairy chest. And sighed many deep sighs of PDA contentment. About which time the door to our house flies open and from the doorway, our son announces in a voice dripping with sarcasm and disdain: “Thanks for letting the dogs in, Cuddlers.”

Hey, we still got it goin’ on!!! Our faces lit up like a thousand watt light bulb had been switched on. “We’re Cuddlers!!!”

And so, my wish for you, Gentle Reader:

May the road rise up to meet you,
May the Hugging Police be ever on your tail,
May the Endorphins of PDA set your spirit free,
And in your heart, may you always be,
Forever young.

Who's the Geezer with that underage babe? Fantastic post! My son brought an old LaZBoy home once--God love him. We lovingly took it over to grandpops basement, where it was assumed into chair heaven.

PDA? Now see being a geek I was thinking personal digital assistant ;)

My kids roll their eyes occasionally but usually they just ignore us. Keep cuddling!

I went to a Christian high school very much like your junior college. Know just what you mean! How very very sweet that you and your BB are still so much in love. :)