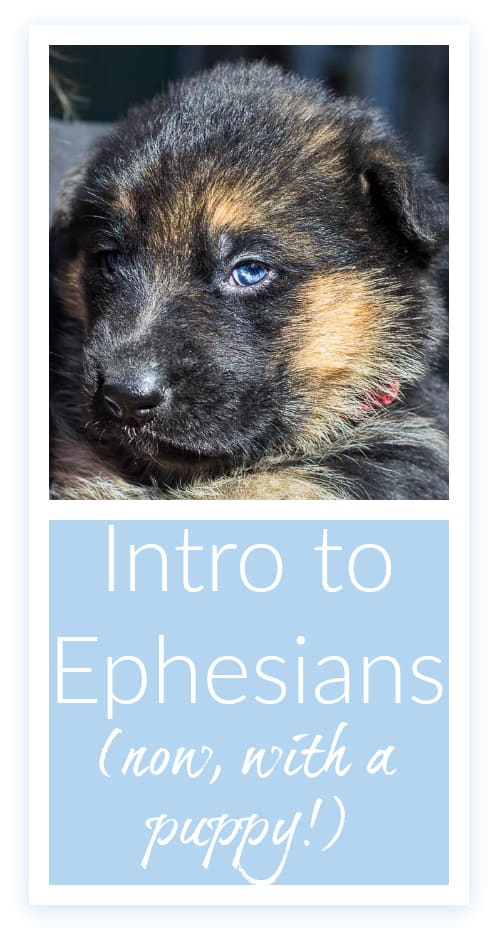 For the next few weeks, I’m going to be leading a Bible study on Ephesians, and I’m sharing here some of the notes I’ve made in preparation for that study: my own little Intro to Ephesians. Since my family will soon be getting a puppy, I thought I would soften the blow of any discomfort you may experience through reading this post, by combining any hard questions I might pose, with the picture of my as yet unnamed, and unclaimed four-week-old adorable puppy.

So…remember…don’t hate me, even if you disagree with me. I brought a puppy.

I want to be sure and mention that a lot of my prep involved using my old Bible Study Fellowship lesson notes, so much of what I mention here, I probably learned through being involved in BSF, and reading their wonderful lesson notes. Their impact in my thought process cannot be overstated.

But because the Holy Spirit is alive and well, indwelling each believer,  faithfully bringing Scripture to life, some of what I’ll be sharing is stuff that occurred to me as I was studying, so, it’s fresh, and I hope will be as relevant to you as it has been to me. With those things said, on with my introduction to the letter written by Paul the Apostle, that is known as Ephesians.

What I hope to give you in this introduction is a little of the historical context that surrounds this letter: the Who, What, When, Where, How, and Why of the letter’s existence, and why all that is important, even today.

Those are trickier questions than you might think, given that the letter starts with this:

“Paul, an apostle of Christ Jesus by the will of God, To God’s holy people in Ephesus”

The “From whom?””It’s from Paul” part is not so tricky. Most scholars agree: the apostle Paul really did write it.

The “To whom?” part is trickier, since the words “in Ephesus” are not found in the earliest manuscripts.
Especially given what the Bible itself tells us in the book of Acts, chapter 19, about Paul, and his time in Ephesus.

Paul did a lot of traveling to tell people about his faith in Jesus.  In Acts, chapter 19, we have the account of Paul’s time in the city of Ephesus (located in what is now, Turkey). We know he went into the synagogue in Ephesus, first. (This was generally his pattern when he went to a new town: to go first to the synagogue, and share with the Jews the news that their Messiah had come, and that he was Jesus, who had been crucified, but who had risen from the dead, ascended into heaven, and who is now seated at the right hand of God.) When the Jews at the synagogue in Ephesus became resistant, Paul took the believers with him and taught every day in the lecture hall of Tyrannus, in Ephesus, for two years. All this occurred long before Paul wrote the letter we’re looking at today.

Now, Paul was a busy guy. He didn’t rely on his disciples for financial support. In fact, he made tents for a living. So, every day, while living in Ephesus, he gave lectures, he made tents, he did good works of healing the sick and driving out demons. We are told in vs. 10, 20, 22, and 26 of Acts 19 that the word of the Lord spread widely, with great power and that Paul had led people “in practically the whole province of Asia” to the Lord. Thus, it’s safe to say that he traveled to cities all around Ephesus, too, during those two years.

Because so many other letters of Paul’s to specific congregations deal with specific problems occurring within those congregations, and because he addresses SPECIFIC individuals in those letters, wouldn’t it stand to reason that if this letter were ONLY to the church at Ephesus, that many of the individuals he had lived with and served with for two years would be named?

Since individual persons living in Ephesus aren’t named, and since the content of this letter is more general in nature, and since Tychicus appears to have been the letter bearer, bearing not only this letter, but a letter directed to the church in Colossae, (compare Eph. 6:21 to Col. 4:7), most scholars believe that Paul wrote this letter as one more general in nature, to be read wherever Tychicus traveled, and that it was to be read to many of the churches in Asia. In fact, the likelihood is that the seven churches in Asia mentioned in the book of Revelation, were likely churches planted by and/or nurtured by Paul, during his time in Ephesus.

This takes me to the “WHAT”.

Paul’s pattern when he traveled to a new town, as we have said, was to first go to the synagogue, basically get himself kicked out by teaching about Messiah Jesus, and then, turn to teach the good news of forgiveness of sins to the Gentiles. Now this was remarkable for several reasons, but the most earth-shattering was this: Paul was building little bodies of believers that were, inherently, by culture, completely divided. Jews didn’t associate with Gentiles. A pious Jew would count himself unclean to eat with a Gentile. And what did a Gentile know of Jewish culture? Not much. Jews kept to themselves, and thus were able to carry on their traditions for generations.

So, what could a Gentile baby believer in Messiah Jesus understand about Jewish law, or Jewish tradition, or worshipping this previously “unknown god”, Jaweh/Jehovah?

Baby Christians -both Jew and Gentile – needed a couple of things: they needed a way to find unity, since they both shared a belief that Jesus was the way to forgiveness and reconciliation to the Father. And since many WERE Gentiles, without access to the Jewish law, or traditions, they needed instruction in how to live a life pleasing to God.

Which takes us to the WHEN – which happens to also be the answer to the WHERE:

That, in itself, is ALSO tricky, because we know of two imprisonments of Paul:
One, in Rome, for 2 years. (Acts 28:30)
And one, in Caesarea for 2 years. (Acts 24:27)
And Paul himself mentions (II Cor. 11:23) that he has been imprisoned more than any other apostle.
It probably doesn’t matter a whole lot to us which prison it was written from, but most scholars believe that due to the advanced overview of theology, it was likely written late in his life, which would mean it was written from Paul’s imprisonment in Rome, which would put the (WHEN) writing date at around A.D. 60-61.

WHO: From Paul, To the churches in Asia, including Ephesus
WHAT: A letter that would serve to educate, unite, and encourage baby believers of both Gentile and Jewish heritages
WHERE/WHEN: probably around AD 60 or 61, from a Roman prison

Now I don’t know how you feel about prison, but having visited there, I’ll tell you that even in modern day, 21st century North America, prison sucks. No one wants to be there!

So…this is where we get to insert the magical phrase: “But God…”

Paul had a fire in his belly to share the good news about Messiah Jesus and forgiveness of sins. We’ve  discussed what his days were like while living in Ephesus – how busy he must have been. And the last thing he wanted to do was have anyone or anything get in his way.

But this is the same Paul, who wrote, from prison, “Rejoice in the Lord, always! I say it again. Rejoice.” It’s the same Paul who wrote “Give thanks in all circumstances; for this is God’s will for you in Christ Jesus.”

Paul tells us that he had learned the secret of being content in every and every situation, even with his hands and feet in chains. Even in prison,  Paul knew he belonged to God. (I read in my BSF notes that it was a practice to chain some prisoners to a guard. Can you imagine being the soldier whose duty it was to be chained to Paul? That poor fellow didn’t stand a chance of remaining a non-believer!)

Perhaps the only way of getting Paul to slow down enough for the beautiful words of this letter to be recorded on a scroll, WAS to bind him, hand and foot, and have someone take his dictation. BECAUSE OF PAUL’S IMPRISONMENT, the church has had riches for over 2000 years, in the letter of Ephesians.

Can you dare to believe in a God whose love for you is so deep, and so strong, that even IN your imprisonment, he can bring good things from it? That if you will look to him in faith, trusting His love for you, and say, “I don’t know why, but I know that you love me, and I’m going to trust you in this”, that He can bring beauty from ashes?

So, the “HOW” of Ephesians is this:

Through Paul’s dark trial of imprisonment, God brought treasure in the form of a letter that has blessed believers for over 2000 years.
What might He bring from yours?

Finally: we come to the “WHY” of Ephesians.
And this part comes with a spoiler alert. But you’ll never remember it. So, here it is.

In Ephesians, Paul reveals that God’s purpose is to bring all creation to the point where it finds its true head in Christ. God intends nothing less than Cosmic Reconciliation. And the church itself with the two groups (Jew and Gentile) becoming one, is a picture of…a metaphor of….that reconciliation.  In the church we see men and women, reconciled to God. And we see Jew and Gentile reconciled to each other.

And while Paul’s apostleship was the key that opened that door of unification in the 1st century church, if God’s aim is Cosmic Reconciliation, surely that isn’t the only division we see today? In the aftermath of the inauguration of President Trump, I see massive division in North American culture. I see political division, divisions of race, color, social status, sex….and our differences CAN breed hostility.

If God’s purpose is Cosmic Reconciliation, and the church is to be a picture of that to the world, how can we engage in speech that is polarizing? Brothers and sisters, I implore you, for the sake of the world, whom God loves so much that He sent His Son to die for it, be ministers of reconciliation. Reach out in love, to work WITH those who are “different” from you. In so doing, you align your life with the purpose of God. Can you dare to believe that God can still bring unity to his body in areas that perhaps culturally divide us? I can.

How can you be a force for reconciliation, rather than a tool of the enemy? The enemy would divide us, so that he can pick off the weak ones at the edges of the flock, one by one.

If you’ve made it to the end, well, then, kudos to you. In weeks to come, I hope to share more of what the Lord gives me from Ephesians.

Oh, Susan!! I love it... feeding our bodies and our souls!

What a great overview of Ephesians! Plus a cute puppy? #homerun Thanks for making Bible lessons so informative and FUN!