One of the things I love about Nashville is that it is still enough of a small town, that you can have the kind of experience that I had Sunday morning.
All the way home from church, we kept laughing and shaking our heads over the wonder of it.. And driving home was a good 45 minute drive, too.
Even now, I almost can’t believe it happened.

Today’s story actually had its origins back in April, when I took a trip to Grand Cayman.
Grand Cayman is a wonderful, magical, mystical place, and certainly worthy of being written about, and perhaps some day I’ll do that, but for now, let’s just answer this question:  How does TODAY’S story, which happened in Nashville,  begin in Grand Cayman?
I can sum it up in 3 words. Two, really, if you take the hyphen into account:

Grand Cayman is a little island south of Cuba, and after Hurricane Ivan, when much of the island was laid waste, what wasn’t leveled got blown around quite a bit. Including the chickens. So houses and farms were flattened, but many of their chickens survived. True, they’d been tossed about much like a Chicken Caesar Salad, but they lived on. And the chickens not only survived, they thrived. So now, many, many chickens roam the island, oh-so-free range, mon. Pretty much everywhere we went, there were the chickens.

My favorite memory of Grand Cayman’s free-range chickens happened outside a restaurant that sold rotisserie chicken and side dishes, for a fairly reasonable price – because food on Grand Cayman Island will set you back a wing and a drumstick, if you know what I mean.  Anyway, we were in the parking lot outside this restaurant, called, perhaps unsurprisingly, “Chicken Chicken”, when what should wander by our feet as we stepped out of the van, but Chicken, Chicken, and his other brother, Chicken. Which got us to wondering if perhaps these particular chickens were suicidal, or guilt-ridden, and coming to turn themselves in. Or at least, risk-takers, perhaps playing Chicken. (“I dare ya to run up and touch the door!!! Whatsa matter? Too CHICKEN???”)

From that (chicken) meal on, we couldn’t help but notice the free-range chickens roaming about the island, wherever we went, and it was kind of fun seeing who could spot them first.

Which leads me to something that happened to me a few months later, about a month ago: I had exited the building where I attend church, which happens to be located on the very famous Music Row, here in Nashville. The neighborhood where we attend church is not downtown, technically, but is very, very urban – just up the hill from the downtown area. The neighborhood is called Music Row, and it is zoned at least partially commercially. It consists of old houses  that have been turned into offices for the music industry: publishing businesses, recording studios, music houses, and the occasional high rise.

Walking to my car, what should I see in this completely urban area? A chicken. Roaming freely, right beside the the mirrored office building that belongs to SESAC (a performance rights organization). It was making its poultry-like way along on the grass beside the SESAC building. Flashback: Grand Cayman! I was so surprised that I did a double-take, just to be sure I was seeing what I thought I was seeing. I came home and made a Facebook status, as you do, about seeing a free-range chicken on Music Row. Right? Because you know you would have, too! #MusicRowChicken

A few weeks later, on a  Sunday morning: there that chicken was again! Patrolling the SESAC building. Weirdest thing! 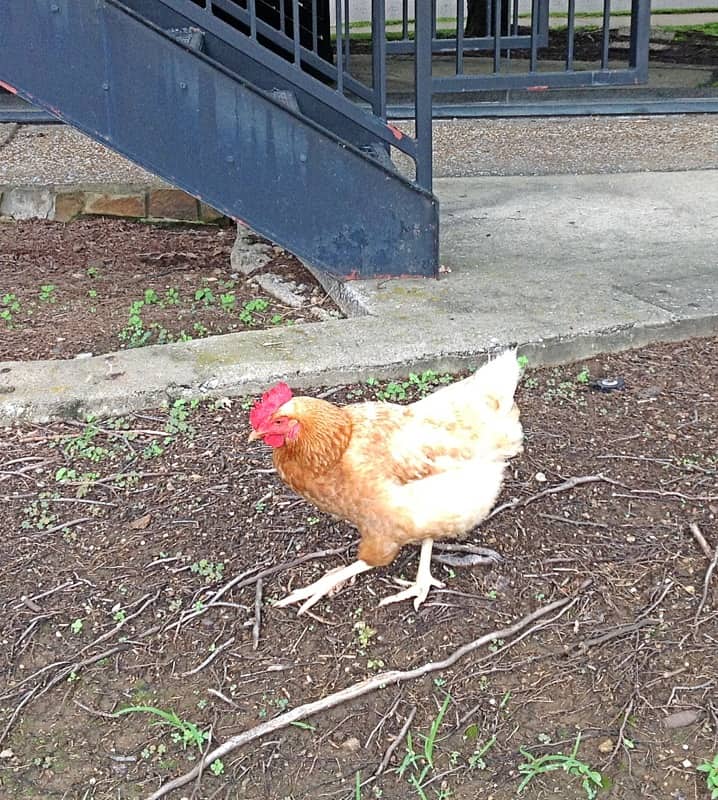 Henry, strutting her stuff on the street, as it were. 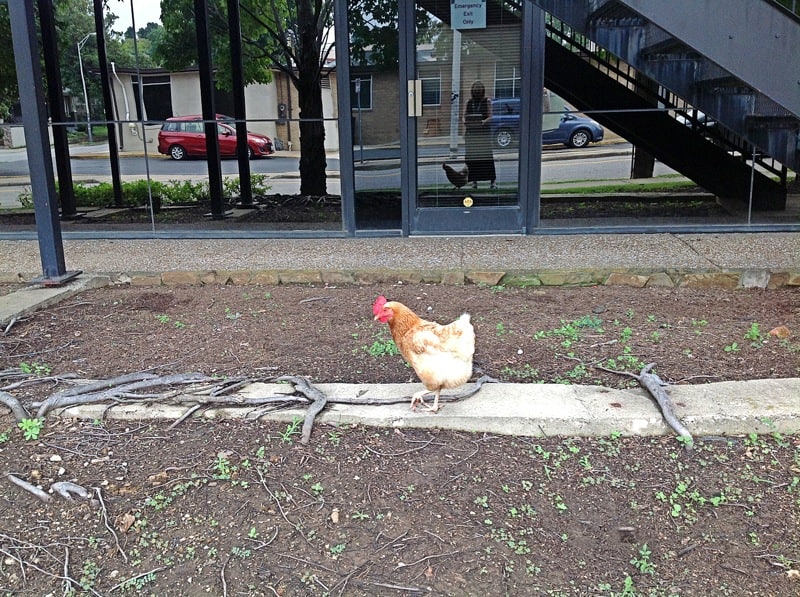 If you look behind Henry, you can see the reflection of both Henry and me in the SESAC window.

So, this week, my husband and I are sitting in the car, waiting for our daughter to exit her high school Sunday school class, and THERE’S THAT CHICKEN – AGAIN!!! Now this time, there were a couple of people watching it. They were on their phones, apparently, taking pictures of it. Not one to be scooped, but also not wanting to just be one of the flock, I waited till they were done, and gone, and then, taking along my trusty iPad, I walked over to the SESAC building and started shooting pictures. And this is what I saw.

Next thing I know, a guy approaches me, and says, “Are you taking pictures of Henry?”

“Why, yes, I am,” I reply. (making the leap that, hopefully, this chicken’s name is Henry.)

“Oh, she loves it out here by this building. Loves to look at herself in the mirrors.”  (The SESAC office building is completely mirror-tinted glass.)

Turns out, this guy is Henry’s caretaker. And Henry is a girl.
A hen.
HEN-RIETTA.

And he lives just a few doors down from the SEASAC building. 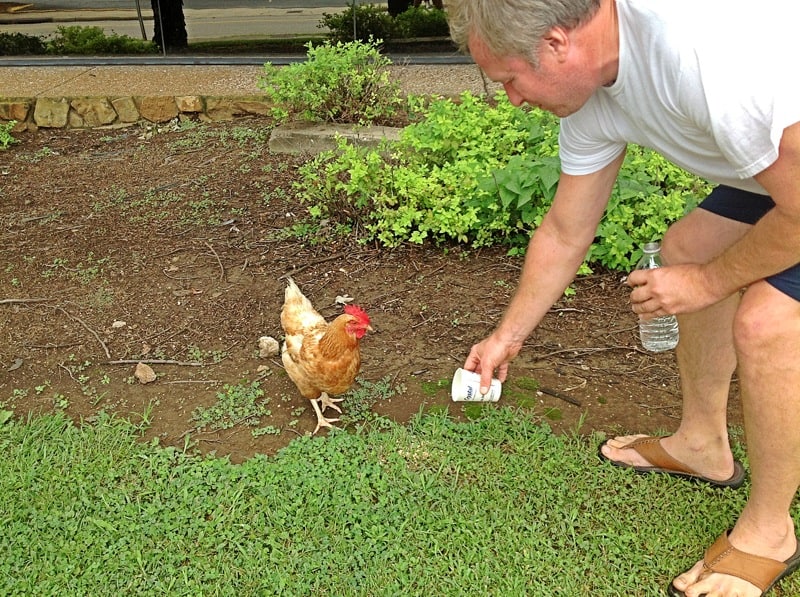 Greg feeding Henry her organic breakfast. Only the best! Yet the cost is mere chicken feed.

He comes out and feeds Henry, organic feed only (OF COURSE!!! This is Nashville! We have standards!!!), and in the course of our conversation, where he assures me that even though he believed at first that she was a rooster, Henry IS a girl, he then tells me that she sleeps in his house, at night, and that each morning, she leaves him a lovely egg. And then he says,

“I’m not a vegetarian, or anything, but, they’re her babies, and I just can’t bring myself to eat them. I like eggs….but…they’re HERS!!!”

And so I ask him what he does with them.

“Well, I give them away to people. People tell me they’re really good. Would you like some? I have a bowlful in the fridge.”

He COULD be an axe murderer. But Henry came to him when he called her. And she still has HER head. And surely her head would have been a likelier first option for his Chopping Block of Death, if he IS an axe murderer. Plus, my husband is in the car, watching us, wondering why in the world I’m talking to this guy in the T-shirt and shorts for such a long time.

What the heck. How often do you get offered free free-range eggs, am I right? Throwing caution to the wind, which in this case is related to counting my chickens before they’ve hatched, only different, I walk with him down the alley, and motion for my husband to follow us in the car, and we walk to Greg’s house.

He points to the other houses, there beside the SESAC building: “These are all going to be torn down in the next 90 days or so, you know. The SESAC building will ultimately be coming down, too, but later. They’re building a high rise condominium.”

“What will become of Henry?” I ask.

“Oh, I’ll take her with me, wherever I go. I’ll build her a chicken coop, too. Let me show you where she sleeps at night.”

By this time, my husband, who followed us down the alley in the car, has tentatively made his way into the house, and I have introduced him to Greg. Did I mention that the walls are covered in chicken art? Hens and roosters, on canvas, line the walls. 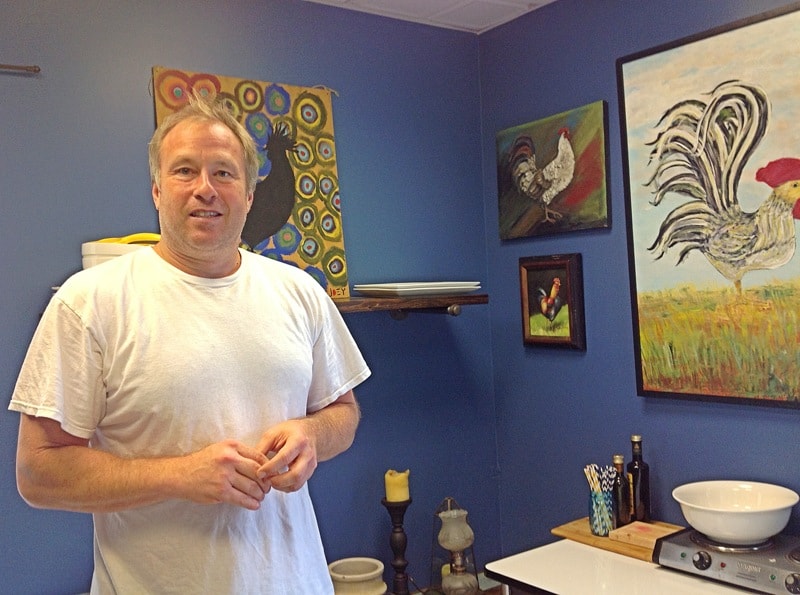 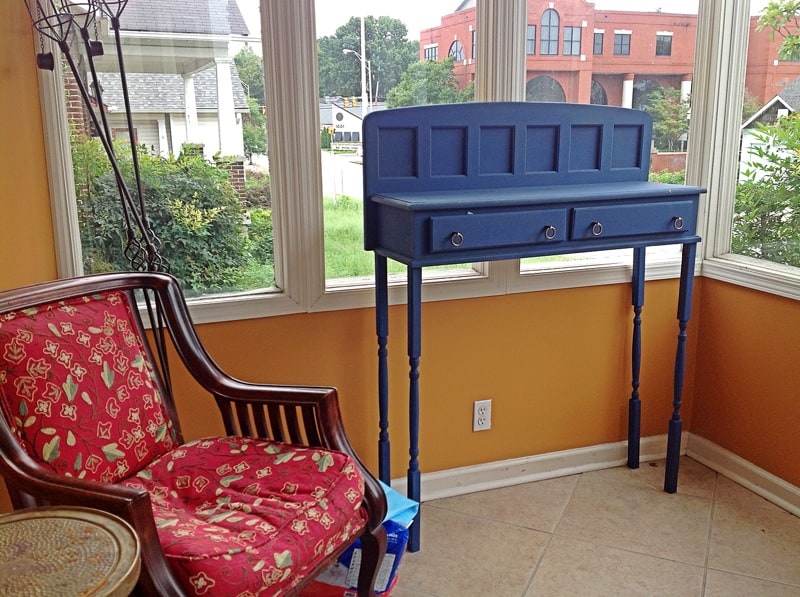 The blue table is Henry’s perch, from which she watches the people and cars of Music Row. The chair is her nest – note the indentation.

Henry has her own gosh darn throne-perch, with a slight indentation in the cushion on which she sleeps. (I’m guessing that this is where she lays her daily egg, but I’m not positive about that detail.) There’s a little bowl of chicken food on the floor, and a little bowl of water beside it.

And then, Greg pulls the bowl of chicken-children-that-will-never-be from the refrigerator, and proceeds to wrap them tenderly in toilet paper, laying them on a paper plate-nest for us, and we thank him, and begin making our way back to the Boonies: that place we live, out in the country…where people have chickens and stuff.

Because life had NO irony.

There are stories, all around us, everywhere, because there are people all around us, everywhere.  (And, apparently, there might be chickens pretty much everywhere, as well.)
Life is full of the extraordinary.
And I think you find the extraordinary, by appreciating the ordinary.
If I’d sat on my tail, in the car, and failed to go enjoy that moment with Henry, I never would have had the delightful experience that I had today, nor would I have eaten the delicious Sunday lunch I just ate. 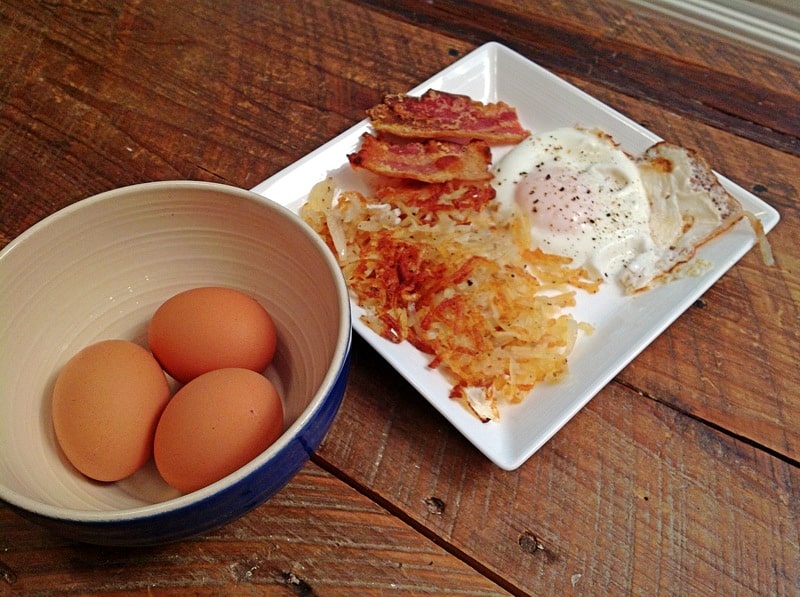 (Thank you again, Henry. Your unfertilized children were delicious.)
It makes me wonder…how many experiences come our way, and slip right through our fingers, all because we aren’t open enough to take a tiny risk: to speak to that stranger, to ask a question, to take the time to really listen.
In the past, I’ve called those things divine appointments. Which I believe them to be.

Greg gave me a treasure today, and he didn’t know me from Chicken Little.
The Circle of Life goes on, deliciously, and I’m thankful to both Greg, and Henry.
I hope Greg and Henry find a wonderful new place to live, before the 90 days are up.
Although I secretly kind of hate that Henry will lose her mirrored office building, where she could gaze upon her own loveliness.
But it wouldn’t surprise me one bit if Greg put a up a mirror on the side of her brand new coop.
Because he’s just that kind of a guy.

I find this amazing, Susan! You're lucky for spotting those little, wonderful moments. And I agree. One can only experience them if one is open and willing. I'll try to remember that. Perhaps, I've even already 'met' Henry/Henrietta but just didn't take the time to really stop and see. The times we've roamed Nashville, I've never seen any chickens. Now, I'll be keeping my eyes open! ;-) Thanks again for this insight!

Everyone should have a good chicken story. I can just see you now. Following Henry is a little different than Mary's lamb I suppose...

Such a sweet story, and I don't think I'll look at chickens the same way for awhile. Thanks!

This is an amazing story! Thank you for sharing it.

This is too sweet and funny! Henry really is one lucky chick!